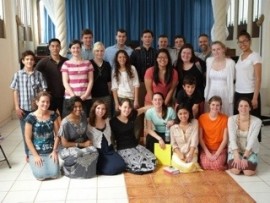 It was Tuesday afternoon. I was sitting in the hospital trying to take it all in. We had planned the most ambitious Chi Alpha Spring Break Missions Trip we had ever undertaken: two teams from American University and the University of Virginia, construction, community outreach, and evangelism, Mexicans and Americans working together. But at that moment, everything seemed to be unraveling. Six of the 20 team members were sick, 5 had received antibiotics and one was hospitalized. Instead of working to meet our goals, I seemed to be scrambling to avert disaster.

But God, who makes all things work together for our good, never stopped working, not even on that Tuesday afternoon. The work never stopped. The Chi Alpha teams, working together with students from the Bible Institute, raised six columns of the second story structure of the Institute’s new multipurpose building and painted the entire first floor. They also collaborated to beautify the communities of Sierra Papacal and San Bernardo, painting the walls that lined the main streets of the villages. It was beautiful to watch how those who might not otherwise had asserted themselves rose to the occasion to keep things on track. We were deeply moved as even local pastors who had heard of our situation arrived to help us to achieve our goals. 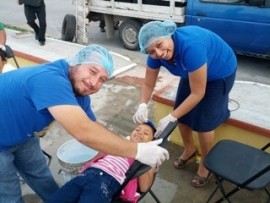 Not only was the work done, but our planned outreaches took place as well. By Thursday, our teams, including those who had been sidelined by sickness were up and active, coordinating a social outreach that saw dozens of kids deloused and taught dental hygiene while moms were able to select from new articles of clothing for their families. Following the social outreach, evangelistic services took place, where children and adults alike were able to hear and respond to the message of salvation.

Reflecting upon the trip, it became clear that it was through the adversities that we faced that the work became a group effort. Those of us who had arrived looking to put forth our best efforts found, through our weakness, a new found interdependence within the international Body of Christ and a renewed reliance on the power of the Holy Spirit to sustain, to heal, and to accomplish His will. Spiritual gifts were utilized that would have otherwise remained dormant. Friendships were formed which otherwise would never have been possible, and our celebration of the work was correctly shifted from what we had accomplished to what God had done in our midst. 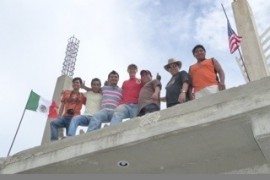 On the Saturday before the teams arrived, the song, “He makes Beautiful Things” had been playing in my head. The chorus of the song repeats, “He makes beautiful things out of the dust. He makes beautiful things out of us.” Although it was difficult to see on that Tuesday afternoon, God indeed worked our adversities together for our greater good. He created something beautiful even out of us.

Have you enjoyed this Spring Break Report? Be sure to check out our photos as well!