The United Mexican States of Mexico is a country located in North America, bordered by the United States to the north, and Belize and Guatemala to the southeast. It is the northernmost and westernmost country in Latin America, and, with an estimated 2005 population of about 106.5 million, it is also the most populous Spanish-speaking country in the world.

Mexico is ethnically and culturally diverse. According to the CIA World Factbook, about 60% of the population is mestizo (mixed Amerindian and white), another 30% is Amerindian or predominantly Amerindian. Some 9% is white (of European descent), the majority being from Spain (Galicia, Castilla, Asturias and Cantabria), though there also large numbers of people of German, Italian, French, Portuguese, British, Irish, Dutch, Russian, Czech, Croatian, Polish, Greek and other Eastern European, and Scandinavian (Nueva Escandinavia, Chihuahua) ancestry. The remaining 1% includes Afro-Mexicans and others.

Religion
Mexico is predominantly Roman Catholic (about 89% of the population), with 6% adhering to various Protestant faiths (mostly Pentecostal), and the remaining 5% of the population adhering to other religions or professing no religion. Some of the country’s Catholics (notably those of indigenous background) syncretize Catholicism with various elements of Aztec or Mayan religions.

The Church of Jesus Christ of Latter-day Saints (Mormonism) has a growing presence in the major border cities of northeastern Mexico, and over 1 million members nationwide. Judaism has been practiced in Mexico for centuries, and there are estimated to be 45,000 Jews in Mexico today. Islam is mainly practiced by members of the Arab, Turkish, and other expatriate communities, though there is a very small number of the indigenous population in Chiapas state that practice Islam.

History
For more than 3,000 years, Mexico was the site of several Mesoamerican civilizations, such as the Aztec, the Olmec, Teotihuacan, the Toltec, Mixtec, Zapotec and the Mayan. 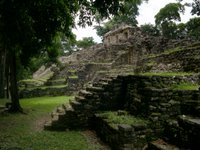 At different points in time, three different Mexican cities were the largest cities in the world: Teotihuacan, Tenochtitlan, and Cholula. These cities, among several others, blossomed as centers of commerce, ideas, ceremonies, and theology. In turn, they radiated influence outwards onto neighboring cultures.

The arrival of the Spanish in the early 16th century and their defeat of the Mexica in 1521 marked the beginning of the 300 year-long colonial period of Mexico as New Spain. After the fall of Tenochtitlan, it would take decades of continuous war to pacify Mesoamerica. Particularly fierce were the “Chichimeca wars” in the north of Mexico (1576-1606).

The colonists brought with them the Catholic faith, to which the population seemingly converted rapidly, but soon they found the natives had adopted “the god of the heavens”, as they called it, as just one of their gods. While it was an important god, because it was the god of the conquerors, they did not see why they had to abandon their old beliefs. As a result, a second wave of missionaries began a process attempting to completely erase the old beliefs, and thus wiped out many aspects of Mesoamerican culture. Hundreds of thousands of codices were destroyed, priests and teachers were persecuted, and the temples and statues of the gods were destroyed. The Mesoamerican education system was set aside and replaced by church education; even some foods associated with religion, like amaranto, were forbidden. Eventually, the natives were declared minors, and forbidden to read and write, so they would always need a white man in charge of them to be responsible of their indoctrination. Although officially they could not become slaves, the system, known as encomienda, came to signify the oppression and exploitation of natives, although its originators did not set out with such intent. Due to some horrifying instances of abuse against the indigenous peoples, Bishop Bartolome de las Casas suggested bringing black slaves to replace them. Bartolome later repented when he saw the treatment given to the black slaves.

During the following centuries, under Spanish rule, a new culture developed that combined the customs and traditions of the indigenous peoples with that of Catholic Spain. Numerous churches and other buildings were constructed in the Spanish style, and cities were named after various saints and objects of veneration, such as “San Luis Potosí” (after St. Louis) and “Vera Cruz” (“True Cross”).

Spanish settlers brought with them smallpox, typhus, and other diseases. Most of the settlers had developed an immunity from childhood, but the indigenous peoples had not. There were three separate epidemics that decimated the population: Smallpox (1520-1521), measles ( 1545-1548) and typhus (1576-1581). Of the estimated 15 to 20 million of the original prehispanic population, less than two million survived. The New Spain of the end of XVI century was an underpopulated country with abandoned cities, which would be the main cause of collapse of the Mesoamerican cultures. 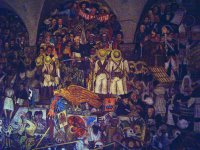 On September 16, 1810, independence from Spain was declared by Miguel Hidalgo y Costilla, a Catholic priest in the small town of Dolores, causing a long war that eventually led to independence in 1821 and the creation of the First Mexican Empire.

Soon after achieving its independence from Spain, the Mexican government, in an effort to populate its sparsely-settled hinterlands, awarded land grants in a remote area of the northernmost state of Coahuila y Tejas to hundreds of immigrant families from the United States, on the condition that the settlers convert to Catholicism and assume Mexican citizenship. It also forbade the importation of slaves, a condition that, like the others, was largely ignored.
The Empire soon fell to rogue republican forces led by Antonio López de Santa Anna. The first Republic was formed with Guadalupe Victoria as its first president, followed in office by Santa Anna. As president, in 1834 Santa Anna abrogated the federal constitution, causing insurgencies in the southern state of Yucatán and the northernmost portion of the northern state of Coahuila y Tejas. Both areas sought independence from the Mexican government. While negotiations eventually brought Yucatán to again recognize Mexican sovereignty, Santa Anna’s army turned to the northern rebellion. The inhabitants of Tejas, calling themselves Texans and led mainly by relatively recently-arrived English-speaking settlers, declared independence from Mexico at Washington-on-the-Brazos, giving birth to the Republic of Texas. Texas won its independence in 1836, further reducing the territory of the fledgling republic. In 1845, voters in Texas approved to be annexed by the United States, and was passed by Congress and signed into law by President John Tyler. Mexico responded by declaring war on the United States resulting in the Mexican-American War of 1846 to 1848. Mexico was defeated by the United States, resulting in the Treaty of Guadalupe Hildalgo, where the United States purchased the remaining disputed territories for $15 Million Dollars, from which were formed the modern states of California, Nevada, and Utah, and most of Arizona, New Mexico, and Colorado (see Mexican-American War).

In the 1860s, the country again suffered a military occupation, this time by France, seeking to establish the Habsburg Archduke Ferdinand Maximilian of Austria as Emperor of Mexico, with support from the Roman Catholic clergy and conservative criolloss. The Second Mexican Empire was then overthrown by the Zapotec Benito Juárez, with diplomatic and logistical support from the United States and the military expertise of General Porfirio Díaz. General Ignacio Zaragoza defeated the French Army (arguably the most powerful in the world at the time) at the city of Puebla on May 5, 1862, celebrated as Cinco de Mayo ever since. However, after his death, the city was lost in early 1863, following a renewed French attack which penetrated as far as Mexico City, forcing Juárez to organize an itinerant government.

Napoleon III of France, Emperor of France, returned Maximillian as Emperor of Mexico from 1864 to 1867. In mid-1867, following repeated losses in battle to the Republican Army, Maximilian was captured and murdered by Juárez’s soldiers, along with his last loyal generals, in Querétaro. From then on, Juárez remained in office until his death in 1872.

After Juárez’s death, Mexico experienced economic growth under the liberal and pro-European rule of Porfirio Díaz. Foreign investment allowed the development of the oil industry and the construction of a railroad system across the country. This period of relative peace and prosperity is known as the “Porfiriato”. His mandate, however, was mostly undemocratic and benefited the middle and upper classes, while the Amerindian indigenous population continued to live in precarious conditions. Growing social inequalities, restricted freedom of the press, and his insistence to be reelected for a fifth term led to massive protests. His fraudulent victory in the 1910 elections sparked the Mexican Revolution. Revolutionary forces defeated the federal army, but were left with internal struggles, leaving the country in conflict for two more decades. The creation of the National Revolutionary Party (which later became the Institutional Revolutionary Party or PRI), in 1929 ended the struggles, uniting all generals and combatants of the revolution.

During the next four decades, Mexico experienced impressive economic growth, and historians call this period “El Milagro Mexicano”, the Mexican Miracle. This was in spite of falling foreign confidence in investment, first through the assumption of mineral rights and subsequent nationalisation of the oil industry into Pemex during the presidency of Lázaro Cárdenas del Río. However the management of the economy collapsed several times afterwards. Accused many times of fraud, the PRI’s candidates held almost all public offices until the end of the 20th century. It was not until the 1980s that the PRI lost the first state governorship, an event that marked the beginning of the party’s loss of hegemony. Through the electoral reforms started by president Carlos Salinas de Gortari and consolidated by president Ernesto Zedillo, by the mid 1990s the PRI had lost its majority in Congress. In 2000, after seventy years, the PRI lost a presidential elections to a candidate of the National Action Party (PAN), Vicente Fox.

On September 19, 1985, an earthquake measuring approximately 8.0 on the Richter scale struck Michoacán and inflicted severe damage on Mexico City. Estimates of the number of dead range from 6,500 to 30,000 (see 1985 Mexico City earthquake).

On January 1, 1994, Mexico became a full member of the North American Free Trade Agreement, joining the United States of America and Canada in a large economic bloc with these two countries that have been more prosperous. On March 23, 2005, the Security and Prosperity Partnership of North America was signed by the elected leaders of those countries.

This article has been modified from its original form on wikipedia.com. All text is available under the terms of the GNU Free Documentation License (see Copyrights for details).