Celebrating a Birthday in Costa Rica! 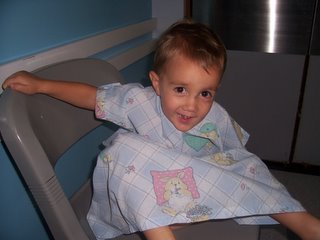 How does Jonathan, our almost three year old, celebrate a birthday in Costa Rica? By having an operation of course! Tuesday, November 8th is Jonathan’s third birthday, and we spent the last week and a half preparing by spending a lot of time in the hospital.

It started with some symptoms that we found earlier in October that necessitated minor surgery. However, the day after we scheduled the procedure, Jonathan fell and cut his face, requiring emergency surgery as the cut was very close to his eye.

Now all of this is difficult enough to deal with in the states, but try navigating through the emergency room in a foreign language! We were helped by a terrific team, however, and we want to take a moment to thank our doctor, Dr. John Longworth, Jay and Nancy Dickerson, the directors of CINCEL for providing translation and taxi services, as well as the entire school for their support, prayers and concern. Thanks goes as well to those who continue to hold us up in prayer. Your prayers do make a difference.

In this picture Jonathan is preparing for the final surgery, and, as you can see, the injuries haven’t dampened his spirits. Hey, he’s rough and tough right? The surgery went wonderfully well and the stitches in his face were removed at the same time. He’ll be able to celebrate his third birthday injury free!