A Picture’s Worth a Thousand Words… 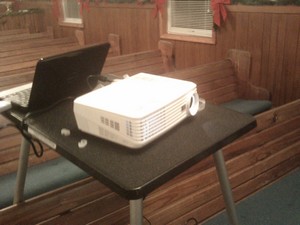 But what happens when you can’t show one? Well, missionary presentations have the tendency to stretch on a bit longer. And with opportunities to speak being more and more limited, the luxury to extend is fast disappearing. That’s one situation we’ll not have to worry about this itineration cycle, though, thanks to Curt Rozean and the SO MO District CE department.

Frequently confronted with situations where a projector is simply not available, we we’re looking to find an inexpensive yet reliable alternative for ourselves. Nevertheless, a projector strong enough to cast an image in a lit room is still a bit pricey.

Enter Curt Rozean of the Southern Missouri District CE department. He was advertising used projectors for sale. At, $250 a piece, I thought that they were definitely worth looking at. I emailed him the next day, but, unfortunately, they were spoken for. I ran into him later, however, at Central A/G in Springfield that night where we spoke again about projectors. He began by talking to me about several sites where I might find a deal, but then he stopped.

“Where do you need to use the projector?” he asked.

I responded, “just from time to time here while I are in the States, when the church we visit doesn’t have one.”

He offered, “Why don’t you borrow ours? We rarely use it and I can call you when I need it.”

A projector to use for free? Would I like to borrow one? you betcha. I stopped by the district office where he gave me not only the projector, but also a table, screen, and a 50′ extension cable. Can you say early Christmas?

Now, I know that it all has to go back sometime, but I’m thankful that Curt found it in his heart to bless this missionary with a much needed tool. In fact, it was put to use just last Wednesday night in Seligman, MO, and it will be back on the job this coming Sunday night in Hartville.

So I just wanted to take a moment and post my thanks to Curt Rozean and the SOMO District CE Department. Thanks for the loan. It will be well taken care of and put to good use!