Is your concept of God affecting your evangelism? 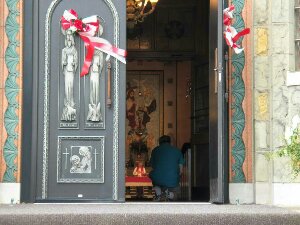 It’s an image that I can’t shake from my mind, there He was, larger than life, glooming down at me from above the altar of my grandmother’s church, an image of God the Father as an old man, His foot resting on the world below him, His staff of justice in His hand. He seemed so distant, so aloof, so unconcerned about my insignificant existence, except, as it was in my six-year-old mind, if I were to disobey, then I would surely face the wrath of the old man.

It’s taken time for me to shake that image, to understand that the same God who caused Isaiah to cry out, “Woe to me, I am ruined!,” is the same Heavenly Father who loved the world so much that sent His one and only Son, that we might have eternal life. It took several years of experiencing His divine grace, of reflecting on the perfect peace that He grants before I was able to stop looking over my shoulder for the blow of heavenly punishment.

Some time ago, the image of the angry God resurfaced, but this time here in Mexico. It’s not hard to see why. The role of the father is traditionally a distant one. Long hours away from the family at a demanding, low-paid job leave little time for the family. Add alcohol to the mix and the situation becomes worse, even to the point of violence. It’s no wonder then, that when one believer attempted to motivate a change in the behavior of a person living in sin, he declared that if he wouldn’t repent, God would exact punishment on his family!

Now, while I would be the first to admit that the sins of the father translate into serious consequences for his children, does this image of the punishing God correspond to one who is rich in compassion and abounding in mercy? Does this image of God motivate the man to run back into the arms of the one who loves him passionately, or does it cause him rather to hide from the wrath of the one who knows only how weigh out justice on evil doers? Just which God are we presenting?

Granted, one could say that that certain believer in question was emphasizing the justice of God, while you emphasize his mercy, but I would contest that the justice that God demanded was satisfied at the cross, any thought that God would punish us as a way to make us pay for our sins is simply against His character. The debt our sins incurred were paid in full at the cross. Through Jesus Christ, the way was made for us to come home. Are our cultural imports to the gospel blocking the way?

It’s a tricky thing to tease our traditions and upbringing from the biblical view of God, but as ambassadors of the King can we afford to allow our erroneous ideas to misrepresent Him?