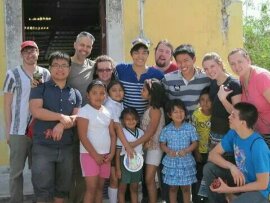 You’d have to question the appropriateness of the phrase as well after having spent the week that I did with these college students! As I had mentioned in my previous post, we hosted a 10 person team of Chi Alpha students and staff from American University as they spent their Spring Break here in the Yucatán. However, contrary to preconceived notions about the time period, these youth did anything but rest!

Following their arrival on Saturday the 8th, we hit the ground running with services in the morning and evening to kick off the week’s events. Our morning service was hosted by La Casa de Oración, the year-old mission in the town of Sierra Papacal of one of my former students, Guadalupe Campos. It was a time of welcome and preparation for the work among the kids that would take place during the week. The evening service was held at Eben-ezer, a church in Mérida, pastored by Gabriel Gongora, the current director of Instituto Biblico Bethel. There, I had the privilege of translating for my brother, Mike, as the team was highlighted for the construction work that they would undertake in the Bible Institute. 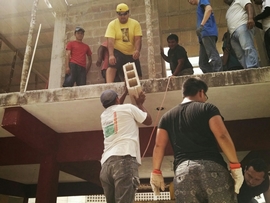 On Monday, the construction began. Partnering with the Bible Institute students, we worked each morning until Wednesday to lift 1500 concrete slabs into place as part of the structure that will serve as the second story roof, effectively topping our three and a half year expansion project of the institute’s dining, classroom, and library facilities.

Each afternoon we worked together to bring Vacation Bible School activities to the children of Sierra Papacal. Following our prep time on Monday, we worked Tuesday and Wednesday in the church facilities, teaching, making crafts, singing, and playing exclusively with the kids. However, on Thursday afternoon, we were able to serve the entire community with free haircuts, hygiene checks, and lunch to boot. Our closing rally in the evening was a blessing as several of the kids to whom we ministered responded to the call to pray to receive Christ. 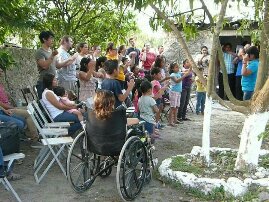 We couldn’t have been more pleased with the results as Mexicans and Americans worked shoulder to shoulder to see God’s purposes advanced in the Yucatán. It was truly a team effort!

And, speaking of team efforts, I’d like to thank all those who had responded to our call for prayer prior to the trip. We were witnesses of God’s faithfulness in every aspects as:

Of course, none of this would have been possible if this team of university students hadn’t forgone their break in order to invest in the Yucatán. So thanks, Mike, and the entire AU Chi Alpha team. Rest assured your work is appreciated!

Did you enjoy the post? Be sure to take a look at the pictures as well!