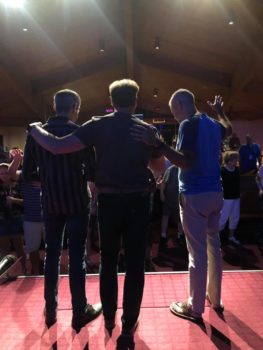 I love the picture attached to this article. It’s of my youth pastor, Jim Grove, praying for my brother and me during our itineration service with him this past July. It is a symbol of the significance of our relationship, one that has been influential in my salvation, my discipleship, and my current ministry. However, what he did on that day was particularly special. He became our advocate. As he publicly affirmed our vision before his congregation, he orchestrated a response on our behalf and on behalf of Mexico, the nation that we serve as Assemblies of God World Missions Area Directors.

Raising advocates is why we’re currently in the United States visiting churches and individuals. This job is too great for one family to accomplish on its own. Now, more than ever, we need others to advocate, to speak on behalf of Mexico as misconceptions abound.

Paul and Sandy Kazim, former Area Directors to Mexico, say this in a recent post to their website: “There are enormous needs in Mexico. Living there, what we see is often quite different from what visitors see. Many churches in the US often consider Mexico a ‘reached’ country. People think they know Mexico. They make regular missions trips to the border. They might vacation at Mexico’s beaches.” Others resonate with a different story, writing off Mexico as a dysfunctional nation to the south, pointing to its corruption, its war on drugs, or its immigration crisis and turn away, attempting to shut out what they might consider is its negative influence.

What we aim to do is to raise up those who would tell a more complete story of Mexico, one that would comprehend the great need and the tremendous potential. We look to recruit those that would choose to see Mexico, not as a travel brochure would see it, not as a politician would describe it, but as God would see it, not only as a place to get away or as a problem to be solved but also as a people, lost but deeply loved, a people that he longs to redeem.

In these upcoming months, will you join us to advocate for Mexico? While you may already be praying for us and for Mexico and giving in support of our ministry, would you speak to others on our behalf? Would you share one of our newsletters (PDF) or our contact information with them that the team advocating for Mexico might grow? Would you share one or two names with us to whom we might tell the more complete story of Mexico and our vision for its redemption?