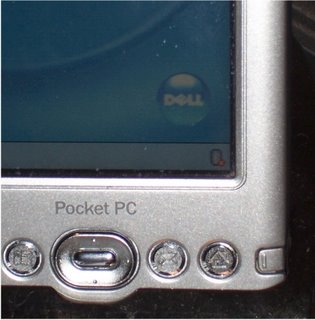 You may have remembered my casualties post, in which I had written about my Pocket PC that met its demise when I fell on it during a practice for the Luis Palau outreach earlier this Spring. Well, it lives again!

Proving that God indeed cares for the details in life, I had thought about purchasing a new screen for the PC after the fall, but the price, nearly $150, the hassle that is involved in shipping anything overseas, and the fact that Kelly philanthropically donated hers to me made me put off the purchase. I put the unit aside and put it out of my mind. On the desk it sat, unusable until our children decided it was time again to explore.

Rebekah, Joseph, and Jonathan are adventurous types. They would rather be anywhere but in their own home. So when Uncle Garritt and Aunt Tara* arrived home, they decided that they need to go upstairs to “see” their apartment, even though they had seen it many times before. The permission granted by the Kenyons allowed the kids to hang out in a different place for awhile, but it also gave the adults a chance to talk.

Garritt likes technology and gadgets abound in his apartment. Blessed with new iPods before coming to the field, he “just happened” to have a Dell Axim x30 that he wasn’t using, not the same exact unit as the one I broke but with the exact same screen. I told him of my situation, and he offered it to us free of charge. So after about 30 minutes of wrestling with both units, I was able to swap the screen of the lesser, functioning model for the screen of my non-functioning unit, and, as the picture shows, the old friend is resurrected!

That a replacement part for my specific Pocket PC could be hand delivered free of charge to Zapote, San José, Costa Rica to our apartment complex is absolutely a miracle. Situations like this remind me that God is truly in control of the big picture and the details as well.