Day of the Dead

I received an email from one of the readers of the site asking about the Day of the Dead rituals that occur here in Mérida. She was wondering if it mirrored the traditional practices that take place throughout the country, or if there was a certain Yucateco twist to the holiday. Not being one to disappoint, I decided to give what insight into the event that I have in this post:

First of all, one needs to be clear about the Day of the Dead as it is traditionally celebrated. Throughout Mexico, the first two days of November are a national holiday during which the country remembers their deceased relatives. The first day is a day set aside to remember the deceased children and the second is “El Dia de Todos Los Santos” or the Day of the Dead proper. During these days, altars are made in homes with pictures of the dead relative along with those things that would have been special to the person during their lives: a sweater, a jacket, a picture or possibly a toy for a child. Also, the deceased’s favorite foods would be on display with the idea that, during these days, the relative would visit to be with the family and partake of the meal there on the altar. 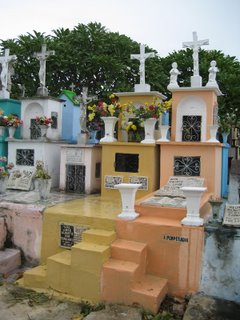 During this time as well, there is much attention given to the family gravesite where flowers are placed and the debris that have collected during the year are cleaned away. One Maya village takes this idea of cleaning to the extreme, and actually exhumes the dried bones of relatives that have been dead for 3 years, cleaning them and placing them on display in boxes. The ritual is detailed in this Yahoo news article

Also, it is said that, during the day of the dead proper, the family gathers at the gravesite in order to enjoy a meal with the dead relative. I tried to witness this tradition, stopping by the General Cemetery here in Mérida, but, possibly because of the rain, I found only a few families placing flowers.

Here in Mérida, there is another holiday celebrated during the same time called El Hanal Pixan. It is a ceremony that predates the arrival of the Spanish and also honors those family members who have died. The picture above, from the local paper Diario de Yucatan shows girls dressed in the traditional Maya “huipil” making tortillas in front of an altar constructed in order to celebrate this event.

We’ve found it hard to experience this holiday living the midst of an evangelical society that has rejected its practice, but I find myself personally torn by this rejection. On one hand, the worship of dead loved ones as a way of receiving favors for ourselves with God or as a way of helping them somehow reach eternal rest are ideas that I reject as being groundless biblically, but the Bible does not consider our loved ones as dead to us. Paul states that to die to be with Christ, and that our spirits continue to live after our physical deaths. Hebrews chapter 12 states that the saints (believers) who have died form a kind of “cloud of witnesses” that seem to cheer us on in our own Christian walk. So in this sense, our struggle to try to forget our dead loved ones seems as well to be a bit unbiblical. I still haven’t had enough exposure to the rituals involved to make an unbiased judgment. So I’ll save any conclusion for much later. Of course this could be something to talk out in the comments section!

So there you have it, a bit of a survey of what went on during this past week as Mexico and the Yucatan celebrated the Day of the Dead. Next year, we’ll hope to be more on top of the action so that you can see more of the sights, and possibly sounds of the season.

Update 11/10/2006: For more about Day of the Dead around the missionary world, see this feature post on Missionary Blog Watch.