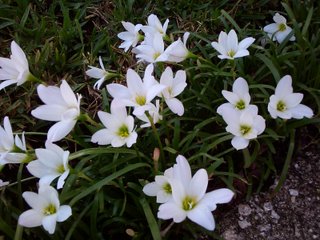 We needed to replace the grass in our front yard about two weeks ago. A busy schedule and low water pressure had taken it’s toll on our previous lawn, and all that was left after the dry season that we’ve had was a lot of dust. So, after a change to our water system was completed, what was left of the old lawn was removed, and new grass was brought in.

As the Agustín, the gardener, was removing the remnant weeds, he looked over what used to be a flower border. “You want me to take these out too?” he asked. The border was a disaster; it looked like a mess of limp grass. Still, I said, “Let’s keep it. Maybe it’ll grow back.” So the limp-grass-once-upon-a-time-flower-boarder remained. Perhaps just to suck up water that would be better spent on the new lawn, I thought, but I had hope.

And that hope wasn’t disappointed. After about one week of watering, one sunny morning I was greeted by the picture above–dozens of tiny white flowers where once only limp grass stood. It was amazing to see the power of life in what seemed to be a hopeless situation.

Nevertheless, a dying flowerbed pales in comparison with the hopeless situations that many of us face. While we’ve been on the field, we’ve watched sadly as many of our friends were hit with what seem to be knock-out punches–unemployment, sickness, and divorce just to name a few. They are situations that are devastating for the parties involved and that leave those of us who must watch confused and questioning. “What is going on?” we ask, “Where is God in all of this?”

Of course, we have just celebrated the triumphant outcome of another seemingly hopeless situation–the resurrection of Jesus after a his death on the cross. The disciples had fled for their lives. Peter had gone as far as denying that he had ever known his former teacher. Jesus Himself, while dying cried out “My God, my God, why have you forsaken me?” The situation was irrevocable, or so it seemed. Nevertheless, just when it had seemed that God’s plan had been checkmated, the table was turned and the outcome was forever changed. That is the reality of Resurrection Sunday, the reality that still reverberates even two thousand years after the event.

I was reading Amy Maxwell’s blog the other day, when I happened upon some free music downloads. One of the songs, Rescue, by Ten Shekel Shirt, caught my attention when I was in the middle of thinking about one of my friends’ seemingly hopeless situation. The chorus of the song reads, speaking of God’s power:

It’s true. As the flowers reappeared from the dust of our yard, so God is able to redeem us even in the most difficult of situations. Like the prodigal son who’d cast away the riches he’d demanded, if we turn to Him, God is ready to receive us and restore us as His sons and daughters, even if we have squandered the chances we’ve been given.

So, if you have a chance to download the song, I highly recommend it, and if you happen to be in one of those seemingly hopeless situations, or know someone is going through one, renew your hope in the fact that God redeems. His empty tomb stands as a testimony to the fact that a restored life is possible.