A bag of chips, a bottle of Coke, and a thought. 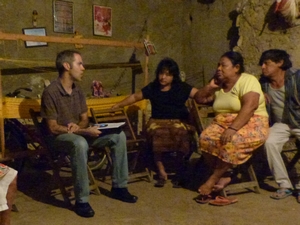 We were in San Isidro de Ochil on Monday night. We went there as as family in order to meet the new congregation planted by Jesus Film team member, Efren Sánchez. We made our way through a driving rain to meet Efren and his team, and then picked our way through the back roads that led from Efren’s village of Pixyah to the town of Ochil. Once there, we met the owner of the home where the church was meeting. Then, I got busy interviewing those who were there while Efren and his group went out to invite those who had not yet arrived.

The prayer service was quite standard in many respects, except of course for the Latinized Maya language that flowed through the house. We sang, prayed for the needs of those in the home, and received a message from Efren about the uniqueness of Christ. It wasn’t until all was over that the significance of the situation struck me.

With the service over, several members of the team from Pixyah headed to a corner store. They came back with bags of snacks and bottles of soda. The snacks were placed in a common bowl and passed for all to share. Plastic cups were then filled and distributed among those who had gathered in the house. It was as I reached my hand in the bowl that I couldn’t help but wonder if this was what Paul had in mind when he gave his rules for communion in 1 Corinthians 11.

Here were people of different levels of education, social circles, and economic status all gathered under the same roof. There were those who spoke Spanish, Maya, and English, conversing with each other, granted, some better than others. There were people from all walks of life sharing from a common bowl. We were disparate members, each with his or her own story, but in this one spontaneous, boisterous, yet holy moment, we were unified as the body of Christ.

There, in that little room, was a congregation. There, in that gathering, a new church had met. This is why we came. We remain so that others might live moments like these, moments that give opportunity for changed lives.