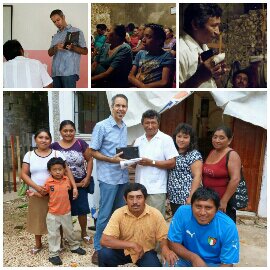 This past Wednesday we had the opportunity to hand out our first Proclaimer Audio Bible. The following is a description of the experience in San Isidro Ochil:

The environment was a familiar one–the congregants were standing together to read the Bible aloud in Spanish. This time, however, there was something different. Many did not have their own Bible and were left looking on to the copies of others or left out completely. Some who did have a Bible read with such difficulty that the public reading was out of sync to the point of being almost indecipherable.

You see, Ochil is a town where the Maya language is spoken predominantly. Many inhabitants understand Spanish, but with difficulty. What is more, many do not read in either Spanish or Maya. Therefore, the traditional ways of doing service, especially congregational reading, is less than effective.

We had the opportunity to deliver our first Proclaimer to San Isidro Ochil. What a blessing to hear the group interact with the Word in M…

That’s where the Proclaimer has such potential. Reproducing the Bible in audio in Maya, the Proclaimer gave many in the congregation their first opportunity to hear the Word of God in their own language, and their interaction following the reading of Matthew chapter 1 showed their enthusiasm. Several people who had been disconnected during the previous elements of the service were engaged and asking questions. I was particularly taken aback when an elderly woman, who seemed withdrawn before, made a comment about Jesus’ birth. The people were having an experience with the Bible!

This congregation and several like it will be making a commitment to meet together for one hour each week to listen to and discuss the Bible. We look forward to seeing more experiences like this first one in San Isidro Ochil, and we anticipate the inevitable growth that will come when a people has access to the power of the Word of God on a consistent basis.

Would you pray for us?