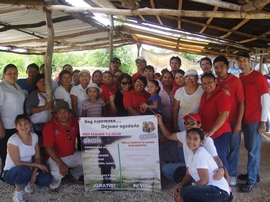 I love a great adventure. As a youth, I remember traveling off to distant lands with the aid of the latest edition of National Geographic. As a missionary, I’ve been blessed to visit some of those places that I had once only read about. I’ve marveled at the volcanoes of Costa Rica, and navigated through the waters of the “Cañon del Sumidero” in the Mexican State of Chiapas. I’ve entered the ruins of the ancient Maya civilization and slept in the thatched homes of their descendants. Still, to tell the truth, although travel remains a highlight of what we do, I gain much more satisfaction from being able to identify with a group of people, establish credibility with them, and enable them to reach their God-given vision. 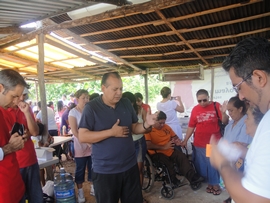 Oxcum, a forgotten little town just a half hour outside of Merida, is a place that was supposedly established as a haven for the unsavory types that transported smuggled goods over the back-roads of Yucatan. Even today, the signs of its difficult beginnings show through: low levels of education, elevated unemployment, the prevalence of single parent families, wide-spread alcoholism and rising levels of drug abuse. It’s a place so down on its luck that it has prompted some to ask the question reminiscent of Nathanael’s in John 1:46, “Oxcum! Can anything good come from there?”

Still in the middle of this hopelessness, a light is beginning to shine. Since 2010, Pastor Ruben Sanguino has been ministering from his mission in Oxcum. We’ve worked with him, first coordinating an outreach in 2011, and later giving a conference on the Holy Spirit. We’ve tracked with him as his congregation has grown, carving out a place and an identity in that town. And while he has seen his share of difficult times, his perseverance is bearing fruit. 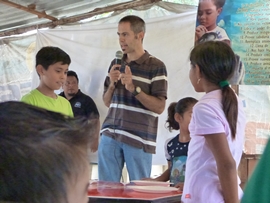 This October 18th, we have the opportunity to work with him again, this time in coordination with the students from my evangelism class at “Instituto Bíblico Bethel.” On that Friday afternoon, we will coordinate with his mission to speak of the God who sees their situation. We’ll be coming near through social outreach to children and adults alike, providing spiritual counseling throughout the event and a message from God’s Word in the closing rally. Our desire for this event is to raise awareness within the village of who the God of the Bible really is, and highlight the mission in Oxcum as a resource for establishing a relationship with Him.

Would you pray for us as the event draws near?

Blessings on you as you continue to stand with us in the work here in the Yucatan, and beyond!