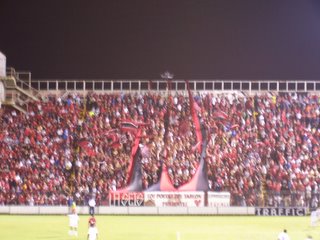 Words cannot describe the frenzy that I experienced as I attended what some would call the premiere Latin cultural event, a futbol (soccer) game. Some of the men from CINCEL hopped aboard the school bus in order to witness the championship game between Olimpia of Honduras and La Liga of Alajuela, Costa Rica.

Futbol in Latin America has no real equivalent in the US. There are baseball fans, there are football fans, but here they have fanatics! I had trouble getting a good shot, as it was nighttime, but the group of “fanaticos” in the picture were truly a sight to behold. Things got started as a flurry of fireworks erupted from the stands. Firecrackers, bottle rockets and sparklers exploded and flashed as the area was literally covered in a plume of smoke. Then the jumping began. The Ligistas jumped for 1 hour and 30 minutes singing and clapping their hands, only stopping to try to pick a fight with the contingent of Hondurans that attended the match. It mattered not that La Liga was putting on a subpar performance in front of them.

The game ended with Olimpia beating the Alajuelans 1-0, but because of a game with the opposite score in Honduras the week before, the series needed to be decided by penales, or penalty shots. As the final kick of the Ligistas entered the goal, sealing the victory, the staduim erupted into a deafening roar. With the game, the fans, the police in riot gear, and the smell of pepper spray in the air, it was truly a night to remember.