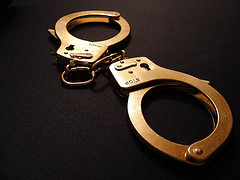 Vergüenza is the Spanish word for embarrassment, and a classmate and I had a somewhat embarrassing run-in with the law today. As I had mentioned in my post on tarea, one of assignments in CINCEL is to talk with the people that we meet in San José. Ron Marcotte, missionary to Ecuador, and I were doing just that, interviewing passers-by in a shopping center, when we were approached by a security guard. After asking us what we were doing, he told us that we would have to follow him to the administration office where we would have to petition for approval for our interviews.

Upon arrival at the office, we were summarily questioned, in Spanish of course, about our activities, and our notes and responses were scrutinized. Finally, we were given permission, only if we would present identification and letters of reference from CINCEL stating who were were and what we were doing. Needless to say, we are crossing that mall off of our list of places to go to chat.

Of course, there was an upside. We did manage to talk to 7 people before we were “taken into custody,” and we did realize that we had the ability to survive in particularly stressful situations in a foreign language. So thank you to those of you who have had faith in us. That faith is paying off. Also, thank you to CINCEL for preparing us to face the situations that may come our way. Of course, come to think of it, we wouldn’t have been in that situation if CINCEL hadn’t put us up to it…

So what do you think? Are you ready for language school? Leave us a comment.