Sickness, missionary ingenuity and why tubs are scarce in Costa Rica 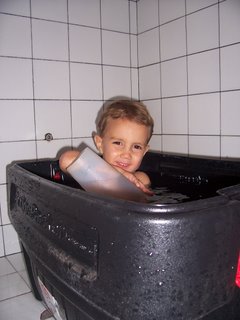 Well you can’t tell from the picture, but this week found Jonathan sick for the third time in 2 weeks. This time with a fever. We are now in the start of the rainy season here, and like what happens in the States during the onset of winter, it seems like people come down with sicknesses during this time of year in Costa Rica.

With the kids in the Kinder program here at CINCEL it has been quite a ride. The ladies are doing there best to keep up, but sickness has taken hold of many as the children pass germs more readily because of the need to stay indoors. Today, the day Jonathan went back, three were sent home with fevers or symptoms of infection. So pray, please, for the kidos. When they’re down it really adds to the pressure of learning and adapting to the language/culture.

Now of course with sickness comes the great variety of home remedies, and Costa Ricans have an abundance. (One that was prescribe for the stomach flu that hit last week was a rice/cinnamon drink.) Now one home remedy that most believe in is the use of a tepid bath to bring down a high temperature. The only problem is that, here, bathtubs are almost as scarce as dish washers!

So what is one to do with a sick child, and no tub in which to give a bath. Well, if you are a missionary, you improvise! We hauled 11 action packers full of clothes and household stuff to Costa Rica. Their size and shape made them perfect for the taking on the plane with us, but the one-piece plastic construction also makes for a great substitute for a tub for a toddler with a temperature among other things. (Fellow missionary Kevin Stewart used one of his for a bassinet for his newborn.) So, the night before last, Jonathan got one of only a handful of baths in Costa Rica. Only this time his plastic tub also doubles as a suitcase.

That brings me to the last part of the post. Why are bath tubs so scarce here in Costa Rica? Well, the first answer that I received to that question was that it was because they were so expensive. However, is it because they are scarce that they are expensive, or is it because they are expensive that they are scarce? (If that confused you email me and I’ll explain that subtlety.) So in probing deeper, Kelly found that the Costa Ricans believe in taking cold showers. They feel that the cold shower helps their skin to stay younger, and helps their breathing as well. (One teacher explained that deep breath that one takes in when entering the cold stream is good for the lungs.) In fact, missionary Jon Dalahger when hosting a building team had to have electric shower heads installed in homes where the construction workers would be housed because none of the homes in that area had hot water tanks. So, according to one theory, since tubs are usually for taking baths in hot water, the fact that Ticos shower in cold water made the tub unnecessary.

So, if you are planning trip to Costa Rica, don’t assume your hotel will have a tub, or hot water for that matter, and if you are traveling with the kids, you may be surprised at how versatile your luggage can be.

Update: 6/7/2006 Jim Cottril has included this post in his compilation of missionaries blogging about culture on Missionary Blog Watch Check out his comments and the other posts that he has included.