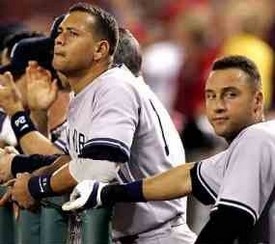 I understand that those who frequent disciplemexico.org are not necessarily interested in baseball, much less in the outcome of the American League Divisional Series. For that reason, I’ve tried to steer clear of baseball subjects throughout the life of this site. Nevertheless, there are several out there who know that I am an avid Yankee fan, and as you can imagine the events that have happened in the course of the past week have left me feeling a bit numb.

Yes, the Yankees lost again. This time manhandled by the Cleveland Indians, a club who just last year wasn’t even sniffing the post season. This of course has had me spending some time looking for ways to deal with another October sans Yankees. You can imagine my surprise when an email from my mother-in-law helped me to put things into perspective.

An avid student of Jewish culture, she came upon a video blog from aish.com titled Isn’t losing wonderful?. In it Rabbi Yaakov Salomon comments on the loss of our beloved Yankees (and the Mets for good measure), suggesting that while “victory teaches you nothing”, “losing can teaching you everything.” He goes on exposit Proverbs 24:16:

for though a righteous man falls seven times, he rises again, but the wicked are brought down by calamity

He states that Jewish interpreters of this proverb suggest that it is not in spite of the fact that the righteous man falls seven times but it is because of the fact that he falls, and the lessons that he learns in the failures, that he rises again.

I think many of us are examples of this interpretation. I know that I, for one, rarely reflect on my victories, but the pain of failure that the sense of loss that follows drive me to determine the source of my defeat and resolve to come back stronger the next time.

So encouragement can be found in the lesson of losing. Of course, now that the Yankees have fallen seven times, I fully expect victory in 2008!