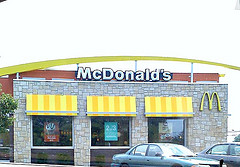 Since we’ve been back from the field I would say that the #1 change for us has been the McDonald’s experience. Moving itself from a kid magnet restaurant barely tolerated by adults, McDonald’s has remade itself with drinkable coffee, a new menu, and a new look. Now, when the kids say, “Let’s go to McDonald’s,” more often than not we say, “OK!” More recently, my reduced ambivalence to this nearly ubiquitous eating establishment set up an opportunity to minister.

It all started when Brad Keller, a fellow minister, scoping out a spot to set up his Mac to catch some free wi-fi, greeted a twenty-something guy named Ricky. After exchanging some greetings and comments about the technology that we were pulling from our bags, Ricky asked us what it was that we did. It was as though he was asking us to tell him about Jesus.

I began by giving him my prayer card and explaining my mission of calling Mexicans into relationship with Jesus. He responded almost immediately with a smokescreen of excuses for not attending church. I sensed from this that Ricky was seeking, but he wanted someone to help him justify his practice of keeping the spiritual at arm’s length. I listened to what he had to say, but I gave him no justifications.

When he spoke of ministers that fail, I responded with statistics that I had heard only earlier that day that it takes some 300 A/G ministers in order to come up with only two moral failures. When he talked about judgmental churches, I encouraged him to talk to two separate ministers that lived in his area that I was sure would welcome him as he was and help him on his spiritual journey. When he brought up others’ experiences, I asked him to look to his own and to understand that he needed a personal relationship with the only on who could settle his questioning; he needed to encounter Jesus.

So I want to thank McDonald’s. Because of their change, they made possible my encounter with a searching heart. I’d also like to ask for prayer for Ricky and his friends. They have my card. They have names of pastors that they can talk to. Let’s pray that they’ll take the next step on their spiritual journey toward Christ.