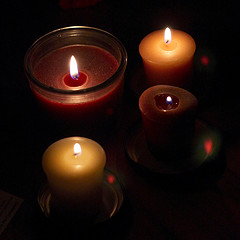 We’ve lost power twice this week during two consecutive days. Both times I was put out of sorts. “I had plans,” I said to myself. “I’m entitled to carry them out.” But something inside me told me that my attitude was out of sorts. Then, when I turned to the Internet to look for some electronic pity, reality smacked me in the face. A fellow missionary in southeast Asia commiserated with us, saying that she had been losing power everyday, sometimes twice a day. My mind was pushed to other friends in Africa who had to buy their own generator because reliable power was simply not available. Yet there I sat in Mérida, a city blessed with every modern convenience, complaining about spending a couple of hours in the dark. Certainly our plight pales in comparison to these other situations.

And yet there was no denying my frustration. Perhaps because as I missionary I had thought that my challenges would come from other fronts: resistance to my message, cultural adaptation, language acquisition and the like. Leaving the US, there was the idea or illusion, as we say here in Mexico, of leaving everyday life behind, of having an adventure with God. Funny, so often this adventure is filled with the everyday.

Inept drivers, sickness, homework, yes, even power outages have not been left behind, but isn’t this too what Christ had to face? He had a constant pressure placed upon him in each moment of the day, and there were always a host of characters waiting for him to slip up in even the tiniest detail. But he never slipped, and although his wrath was displayed in the cleansing of the temple he was throughout without sin.