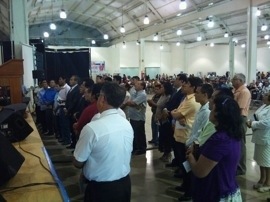 Leadership elected in the 2011 District Council

I know that I’ve already asked for prayer this month, but at the risk of over-asking, I’m coming back to you with a special request for prayer for our District Council and especially for the elections that will take place during that council.

By the time that you read this we’ll be in full swing in this year’s Yucatán District Council. We’re thrilled to have our National Superintendent, Abel Flores, as our featured speaker. It will be a privilege to hear more of his vision for the future of the Assemblies of God in Mexico, but the main reason for this update is to ask prayer for the elections that will take place during this year’s council.

Up for election will be the entire leadership team, Superintendent, Secretary, and Treasurer, as well as well as the entire slate of Regional and Sectional Presbyters and Presidents. Also up for election are the various department heads, including the position of the Director of the Missions Department, a person with whom we’ve worked closely for the past two years.

Pray with us generally for the entire Council. We desperately long for a sovereign move of the Spirit that will stimulate evangelism, church planting, and missions here in the Yucatán and beyond.

Pray with us specifically for a desire to have God’s will accomplished the council elections. Pray that any thought of politicking would be laid aside in order to see the right people placed or retained in each office. Pray as well for a spirit of transparency throughout the election process, and pray for me as I participate as a part of the “Mesa de escrutadores,” the committee charged with counting the votes and reporting the election results.