Accuse Us of Not Being the Sharpest Knife in the Drawer? 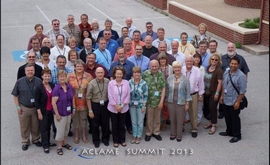 If there was any doubt that we belonged to a vanguard mission organization, that was dispelled last week during our Association of Caribbean and Latin American Missionary Educators’ (ACLAME) Summit.  As part of the ACLAME Leadership team, I was called upon to help organize this biennial event which brought together 52 individuals from 7 different countries.

During our time together, we received a word from our Executive Director, Greg Mundis, who cast vision for what he sees as a bright future for world evangelism, a task in which he sees educators playing a key role.  Still, that was only one of several sessions that have left an indelible mark on those who attended. Paul Kazim, Mexico Area Director (photo left) spoke from Leviticus 19, reminding us that holiness is essentially taking on the characteristics of God. Assemblies of God Theological Seminary Professor, DeLonn Rance, challenged us to “live at the edge,” responding to God’s call to reach all nations.

These and several others blended their voices to encourage us and to strengthen the calling that each of us carries to pass on what we have received. (2 Timothy 2:2) What happened during those critical days is the essence of Proverbs 27:17–men and women, joining together so that each one might be improved or “perfected” into a more useful tool in the Master’s hands. This same blessing we desire to pass on to our Mexican colleagues.

In the month of August, we will be holding the first ever Mexican Education Summit (bottom graphic), an international effort that seeks to raise the bar in ministerial formation. Plans are coming into shape to host over 400 Bible School directors and professors from across the country. We’re praying that the event serves to motivate all who attend to dedicate themselves to the task of raising up leaders for this crucial time.

Also, this month, we are looking forward to graduation ceremonies at Instituto Biblico Bethel. In all, eleven students will be participating in the commencement activities, looking forward to launch out into the ministries for which they have been trained.

Can you pray with us for these events?