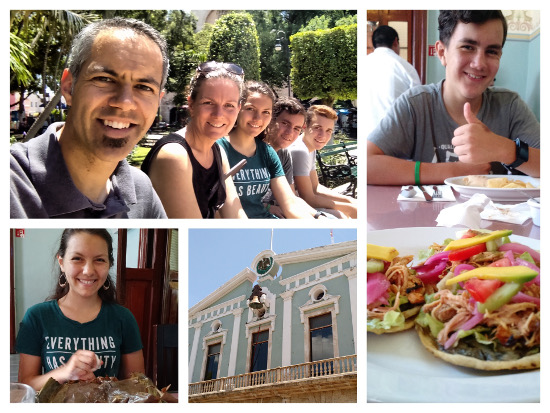 Early Tuesday morning we loaded eight action packers (a missionary’s equivalent of a suitcase), a guitar, a violin, a dog and a family of five onto a plane bound for Chicago. Three connection flights later, we landed in Merida, Yucatan, the city we will be calling home for the next four years. Thanks to you we can finally say “We made it!”.

Gabriel Gongora, a local pastor, and his wife, Leticia, met us at the gate with Yucatecan hospitality. Julio Montejo, another friend, was there with his truck to load up our bags.

After a few delays (of those 8 action packers only 7 made it) we arrived at a house Silverio Blanco, the district missions director, has loaned us until we can find one of our own. We were met by his son, Eliú, and his wife, Doris, and son, Moisés. The rest of the day and Wednesday we spent getting new phone numbers and looking for houses. The search was on!

Thursday, we were able to enroll Joseph and Jonathan into Centro Educativo Calvary (Calvary Christian School) and see some old school friends. We also looked at three or four different houses. Thankfully, the last action packer arrived as well.

Friday we visited ‘el Centro’ for the first time since we got back, where we were reacquainted with the hustle and bustle of Merida’s downtown. We ate delicious typical foods like, Pollo Pibil ( chicken cooked in banana leaves), Panuchos (fried tortillas filled with refried beans and toped with turkey and vegetables), and Sopa de Lima (lime soup with chicken).

Later on we looked at more houses and might continue to do so for the next week. We aren’t despairing yet though. Searching for a house that meets all our needs is time consuming and requires lots of thinking and input from family members. We are confident that God will show us the right one. Thank you again for all your prayers and support. It means a lot to us.