There’s Got to Be a Better Way 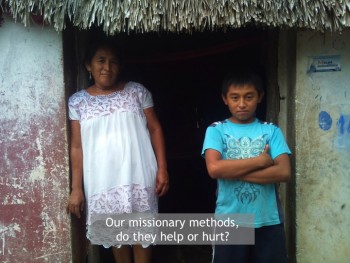 I sat there in the audience as I heard the report. It was Missions Sunday and we were hearing from a recently returned missions intern. Like many other missions interns she had been sent to a remote, indigenous village. However, in this particular case, the work in that village had been going on there for 20+ years. She also reported that village was nearly 50% Christian. This information made me scratch my head. Why would she be sent there? She was sent there because the church had been without a pastor for two years. There was no one who had wanted to “go” to that poor, remote village.

I wondered if I was the only one hearing her talk. I wanted to ask, after twenty years, weren’t there those among the village qualified to take up leadership of the congregation, especially if half of the population professed Christ? Had the discipleship process been so slow that, even after all that time, there was no one who could serve as the pastor? By calling on a missionary to fulfill that role, were they dooming the work to remain a foreign one, one that would continue to need outside resources to even survive?

Still, as I reflect on some of the works that we’ve observed, even had a hand in planning, I have to admit, there are several that are dependent on foreign resources and personnel just to stay afloat. And while, in many of those cases, we can marvel at the testimony of change in individual lives, the organization fails to fulfill its potential, because it’s been held back by its “overprotective parents” or its unsustainable model.

“There’s got to be a better way,” we’ve told ourselves, and we believe we’ve found that way. In our summer 2015 newsletter, I spoke about a training seminar that Kelly had taken called “CHE.” Since that time, both of us have had the opportunity to receive training, and we’re now at the point of putting our training into practice.

CHE or Community Health Evangelism is a system that enables a community to take responsibility for their own holistic well-being (physical, emotional, and spiritual). Limiting outside resources, CHE empowers participants to discover biblical personal wellness and strive to make their community a better place to live. It’s decidedly low-tech with a view to invite grassroots participation from the very beginning and to train up leaders to take over the program soon after it begins.

Since our time in Tixpehual, seeing the slow progress that the A/G has made in that town, we’ve asked ourselves if that community of roughly 3400 people would be a good place to begin a CHE community. We’ve investigated and determined that the interest was there to move forward. This coming Friday, November 13, we begin a vision seminar designed to explain CHE’s potential.

Can we guarantee that CHE will be the answer to the slow, halting progress in Tixpehual? In a word, no, but we can begin well through CHE. Through it we can help its leaders and participants to understand that the gospel can and will grow. It will grow when we realize that it is an integrated message that brings wellness to the whole person and when we personally engage in applying that message to our situation.