September 26, 2008 in Devotional, Mexico, Ministry, Missions, Thanks by Dave | 4 comments 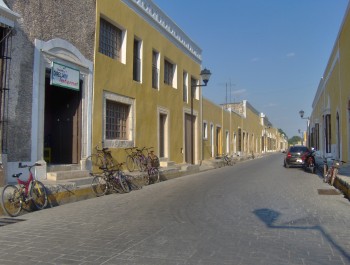 The streets of Izamal

It was Sunday September 7th. We had been driving that morning to Izamal, a village about an hour outside of Mérida in order to attend the district-wide prayer meeting, when Kelly asked me about a passage that she had been reviewing for an upcoming women’s meeting. With Mexico’s Independence Day celebration upcoming, she had settled upon Galatians 5:13: “You, my brothers, were called to be free. But do not use your freedom to indulge the sinful nature ; rather, serve one another in love.”

Using the passage as a jumping-off point, I remember expressing an idea that came to my mind: “Being released from the bondage of sin, we are now free to humble ourselves and serve one another. Although the external circumstances would suggest a different reaction, we are free to love when before we were tied to serve only our own passions and interests.”

Little did I know, however, that what was then theoretical would become suddenly very concrete.

As we were leaving the city after the meeting, we had stopped at a stop sign and were beginning to continue when, unseen by us, a motorcycle carrying 3 teenagers attempted cross in front of us. They struck the front of the truck and fell against the curb of the opposite corner. All three weren’t wearing helmets.

Immediately, I got out of the truck to tell the boys to stay where they were. Soon, those that lived near the scene were out of their houses, and before long, the police and ambulance arrived. Those that were hurt were taken to the hospital, while we were escorted to the police station where I was detained for 33 hours, first at the station, and later at the Public Ministry building in Mérida.

Now, in the US, when an accident occurs, rarely does a person go to jail, but in Mexico, when there is doubt about payment, the person who causes the accident is detained for 48 hours until the situation is settled. If it is not settled in 48 hours, the driver goes to jail. Unfortunately, although we had Mexican Car Insurance it took the adjuster one hour to reach the scene, and it wasn’t until later that night that the lawyer arrived in order to begin the process to post bond so that I would be released.

Nevertheless, being placed in detention didn’t mean that I had been placed on a shelf. The words that I had spoken just hours before came back to me during my time alone. So I prayed. I prayed for the injured boys. I prayed for Kelly and the kids, and I prayed that God would use me. I knew that, even though I had been detained by the authorities, I was free to serve. 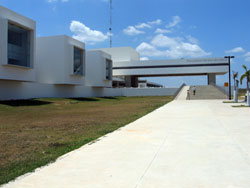 In Mérida, I was made to wait in a room with three benches and an air conditioner that had seen its best days perhaps 10 years ago, but I was not alone. It “just so happened” that, there with me in the “waiting room” was a man who we’ll call José. He had arrived the day before, having crashed his car while driving drunk on his way home from work on the other side of the peninsula, but that wasn’t the whole story. He was also a prodigal son.

He had once had a vibrant relationship with the Lord and had been an active member of the Christian community, but his work had isolated him, and in his isolation his bad choices multiplied. The crash was the end of a slippery slope that had left more than his car in a wreck, but sometimes it takes hitting bottom before we begin to look up.

José told me his story, and I told him mine, but I didn’t end it with the story of the accident. I told him that although God hadn’t caused my accident, that my meeting with him was certainly more than coincidental. I told him of the Father that welcomes home all who return to Him, and I invited him to start the journey back. We prayed, and in that detention center, we felt the presence of God. We knew that even though it seemed that our immediate future was out of our hands, we knew the hands that held our eternity.

José wasn’t the only one in the room with me. There were two youth who had been detained for driving drunk, and two others who were in the middle of a dispute between their respective insurance companies. While we waited for news about our situation, we formed a community: we talked about our families and our faith, we shared everything from the food that was brought to us to the floor that we slept on, but what filled me with the most joy was our last moments together.

When word came that was to be released, I asked if they would mind that I prayed. Given permission, we all bowed our heads and I began. I prayed for their safety and the resolution of their situations. I prayed for their families and their future, but, most of all, I prayed that each one of them might know Jesus, the only one who, in whatever situation, can set us free.

In wrapping up this lengthy post, I want you to know that we are well. Although the accident has certainly left a mark on us, with God’s strength we are returning to “normal life” here on the mission field. We have definitely been the beneficiaries of the blessing of the Body of Christ in action through it all. From the prayers of the saints to the selfless help of our church friends and district officials, we have been cared for throughout this entire situation. Blessings on all of you who have been a part of this comfort that we have received.

Furthermore, it has been reported that all who were injured will make a full recovery. They have received the medical attention necessary and are now receiving spiritual care on behalf of the local A/G congregation. It is my prayer that this temporary setback will serve to redirect their lives toward a relationship with the one who can guide them through their eternity.

As for José, we were released together and are planning to get together soon to celebrate our freedom, freedom that God redefined for us in the middle of our captivity.

Photo of the Public Ministry building from Yucatan Living.com. You can read about their experience here: https://www.yucatanliving.com/yucatan-survivor/yucatan-license-plates.htm