“Deja Vu All Over Again” 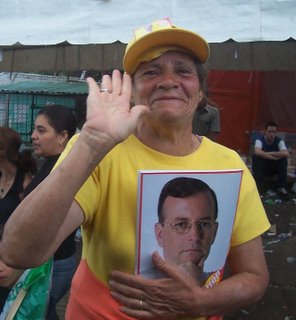 Costa Rica held its presidential elections this past weekend, an event that occurs here every four years. There were 14 parties (sample ballot) that were running for a chance at the executive post, but, as it is in the United States, only two contenders, Óscar Arias of the National Liberation Party and Ottón Solís of the Citizen’s Action Party had realistic possibilities of winning the election. As of early January, it seemed as though the race would be extremely one-sided, but the elections turned into a dead heat in the final days with Arias falling while Solís gained support. Still, no one was prepared for what happened at the polls on Sunday.

Turn out was lower than normal, with about 36% of those registered abstaining. The streets, normally choked with voters going to the polls were virtually quiet until the late afternoon, but inside the booths, events were happening that would have people talking for years. Because, as it stands now after 90% of the votes have been counted only 3,429 votes separate the top contenders. With the separation this close, The Supreme Elections Tribunal is now begining a manual recount of the votes. (Sound familiar?) The difference here is that there is no Electoral College here in Costa Rica, the president is elected by gaining at least a 40% majority of the popular vote. So, if the margin of victory is only one vote between Arias and Solís, the man with the most votes wins. 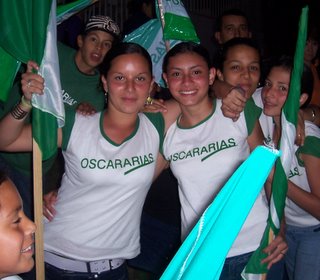 We got a chance to drive through the city on Sunday to view the event with Costa Rican missionaries, and as you can see from the pictures in this post, the people tend to identify with their candidate a bit more than we do in the States. In fact, Election Day, being a Sunday, takes on the air of a festival, with vendors on the streets and people going about displaying their alliances. The only difference is that this is a decidedly dry holiday, as no liquor is sold from Friday until Monday morning, a measure taken to force poll-goers to make sober decisions. Still, as the count went well into the night, with no clear winner determined, several went about their Mondays “hung over” from the indecision of Sunday night.