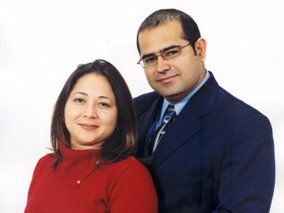 During our time on the itineration trail, we had the chance to share with some groups that missions is a world-wide mandate, that God is calling people from everywhere to go everywhere in His name. We have several examples of this reality here in the English program at CINCEL, people that have been called from nations traditionally classified as missionary receiving countries. One of those examples is Jaime Chacon.

Jaime, together with his wife Jacqueline have responded to God’s call to go to the United States. They will serve South Carolina and the surrounding area by spearheading an effort to raise up missionaries, first to reach the expanding Hispanic population in the region and then to train those who would respond to go to the world.

Jaime and Jacqueline are slated to begin their first term in the U.S. in January 2007. Their main focus will be the creation of a district-wide missions department which will assist with church planting among Hispanics, and then be available to train missionaries called out of the region.

Called into missions at the age of 17, Jaime felt a burden to reach the Arab nations, but as he followed the leading of his heart, it became clear that God was redirecting him to the U.S. to train others who would go: “I believe,” said Chacon “that God blesses those nations that send missionaries, It is our desire that The United States continues to receive that blessing.”

Some interesting facts about the need for Hispanic missionaries to reach into the U.S. from other countries: