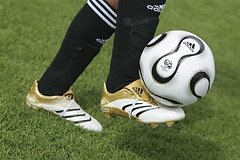 The sidewalks are empty. The shopping centers are deserted. There is an eerie silence in the streets. No, this is not a city-wide disaster drill, we’re watching the World Cup.

What is this you say? Well as you have noted in my previous post, soccer is not simply a sport, it is a way of life for many Costa Ricans specifically, and world sport fans in general. In fact, although baseball is America’s Game (and my favorite), soccer is truly the world’s sport. The World Cup is a tournament that takes place each 4 years, in which one country wins the right to be the world’s best in the world’s biggest pastime. 32 teams have classified in the years preceding this tournament and have won the opportunity to play for the title. The US is in it, and the Costa Ricans, having beaten the US last year in order to receive their classification have also entered into the tournament.

So what is this baseball loving north American supposed to do? Well, go out an buy a jersey and root for the home team of course! (Fortunately Costa Rica doesn’t come up against the US or Mexico in this round.) As a school, we watched the defeat of Costa Rica 3-2 against Germany last Friday, and we rooted and booed with the rest of the country glued to their TV sets. I realized, of course, that my Spanish wasn’t getting much better in the process, aside from being able to practice rolling my r’s with the announcers, but something happened in the process that was more profound than the conjugation of verbs. As I sat side-by-side with Ruddy Pizarro and his brother, sharing one of their passions, I found myself identifying just a little bit more with the culture that God has called us to serve and moving closer to the incarnational model of ministry that Christ modeled for us. And, who knows, although Spanish grammar is on the schedule, 8:00 AM tomorrow may just find us seated around another game as Costa Rica takes on Ecuador.

For more on the World Cup ’06 through the eyes of missionaries, Jim Cottrill, the man with his finger on the pulse of evangelical missionary bloggers at www.missionary-blogs.com, has posted some great highlights, including a World Cup Prayer Guide.