Dealing with the Heat 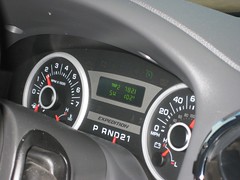 To the left you’ll find a picture of our speedometer in our Ford Expedition. The thermometer (numbers on the bottom) read 102. That reading was taken in late August as we crossed the border between Texas and Mexico. Imagine my surprise when this Thursday I looked down to see a reading of 105! Yes, as you have read in my previous post, A Culture of Waiting, we’ve been dealing with the heat quite regularly, so regularly in fact that although the post season is on in baseball, it’s been nearly impossible to “feel the fall in the air.”

Still we’re finding that the people of Merida have a bead on beating the heat. Many stores and businesses close from 2-4 when Mexicans normally have their mid-day meal. Not necessarily an official “siesta” time, it is still a time to get in to a cooler place at the height of the afternoon temperatures. It’s no wonder most of the houses are constructed of block here instead of wood. While also providing more strength against the hurricanes that have been known to sweep the peninsula, they also keep much cooler than their pine constructed counterparts.

Don’t try to find anyone at a park during this time. While there are many in the city, they stay dormant through the day, only to come alive in the evening around 6:00 PM when things start to cool down. Restaurants see business pick up around 8:00 and most cultural events don’t start until 9:00, quite a challenge for this family that was accustomed to turning in at about 10:30. Still, we’re adjusting little by little. Besides two showers daily never hurt anybody.