Waking up to the Need 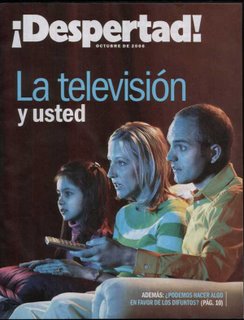 Where has September gone? Between getting our trip here, getting our house in order and applying for our visas, it seems as though we’ve burned through a whole month! Just now catching our breaths, we’ve found some time to look around a little bit, and we’ve been a bit surprised at what we have seen.

The other day, while I was working on our front lawn two very friendly ladies, one in her fifties, the other a bit younger stopped by. Carrying materials that they offered me, they began with a message about the dangers of too much television watching, a subject that many of us are open to. However, as I probed a bit deeper, I found that they represented the Jehovah’s Witnesses, a cult that claims to be Christian yet denies the divinity of Christ, marking them beyond the fold of what we would call the Orthodox Christian Faith. The surprising thing was that not only were they out but they were out in force, going door to door with at least three groups in our neighborhood.

It also appears that this neighborhood is a neighborhood in search of God. Stopping around the corner to get my car washed, I struck up a conversation with Alberto, the owner. The subject turned to my work, which gave me an opportunity to explain who I was as well as talk a bit about my acceptance of Christ. When the conversation turned to his faith, he answered that he really didn’t know what it was that believed, but he certainly was willing to listen to what I had to say.

Going back to the Jehovah’s Witnesses, you can see the magazine that they left with me earlier in this post. The title is “Despertad,” which is a Spanish command that means: “Wake up!” I think that is what Kelly and I have received, a wake up call to the readiness of those who are searching, evidenced by my conversation with Alberto, and the limited time that we have to reach these searchers as false religions sweep in to snatch up those who are spiritually vulnerable.

Please continue to pray for us as we pray to reach Merida, and pray for those like Alberto, that they might be receptive of our message.