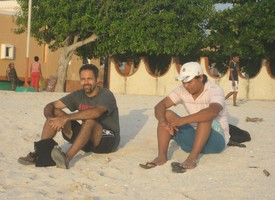 The definition of missions is changing. I recently returned from the Mission Exchange fall retreat where it was obvious that the upcoming generation of leaders thinks differently about the way cross-cultural ministry should be done. One speaker put it plainly. “To me a missionary was a guy in a four pocket shirt (guayabera) who traveled with snake skins and a slide projector.” He couldn’t relate. In a context of rapid globalization, where the world seems to be shrinking by the day, more and more students and professionals are saying, “Missions? Hey, I can do that!” They’re an eager workforce looking for the right project or missions-sending agency with which to partner, and when they can’t find one, they’re making their own. One pastor, Matt Chandler from the Village Church, looking to implement a business as mission model grew impatient with his denominational organization and started his own organization which is funding 14 missionaries and a handful of missions projects in several countries.

“To God be the glory, more workers in the harvest!” might be the reaction to the current situation, but such trends give this missionary pause for thought. The church today has, to a certain extent, adopted the current business mentality. For a project to be successful, it needs to produce quick and substantial results. ROI, or Return on Investment, a term ripped out of the business manager’s handbook, was thrown around a bit at the retreat. Donors are looking to see their dollars make a tangible impact on a community, so the funding of hospitals, feeding programs, orphanages, and even the establishment of Christian Businesses are becoming increasingly popular. Still, the question remains, “Is this the best way?”

My time here in the Yucatán has shown me that the work of a missionary is never quick nor easy. What may be able to be started through a project or an event must be continued through sustained process–biblical concepts applied to the cultural situation. This requires someone on the ground, an interpreter. This role was the one that the missionary traditionally occupied–studying the language and culture in order to reveal Christ and the Christian message through concepts that could be understood and adopted. I don’t put myself at this level yet. We have much to learn to fully understand the culture in which we are ministering, but I feel that we are making progress.

For example, these past two weeks I’ve carried on redemptive conversations in three separate settings, one a meeting to minister to a hurting woman, another a conversation about discipleship over lunch, and finally an impromptu chat with a carpenter at the local library. In each setting, through an understanding of the linguistic, cultural, social context, I was able to determine the relationship that the individual had with Christ, move them further along in the discipleship process, and, because I live here, follow up with them to clear up uncertainties or integrate them into the local Christian community. This doesn’t bring about the headline worthy results of a evangelistic crusade or a medical missions team, and often a cup of coffee or a chat on the beach doesn’t “look” like ministry, but statistics show that, over the long run, this is the most effective strategy (McIntosh, Finding Them Keeping Them, 1992:45). In reality, this is where cultural exchange happens, where we can study, share, and begin to understand one another. This is not to say that we are no longer preaching, teaching, or planning events, but we find that it is in the follow-up, the relationships that we find that we make the most progress toward discipling Mexico.

The “new” trend in doing ministry has its place, but we must understand the risks involved:

The reality is that incarnational ministry, “walking among the people” is the only real method to effect change in a culture. Programs pass away, and events come and go, but it is my hope that the presence of the missionary and the example of the ambassador of Christ in the cross-cultural context will remain.