Leave if You Can! 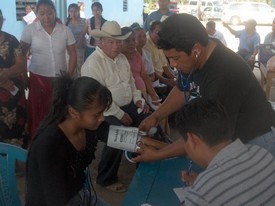 “Leave if you can!” That is the translated name of Salsipuedes one of the two towns that we visited on our medical relief trip to Tabasco. The village of Salsipuedes is situated on the Grijalva River in the Centla of Tabasco, a wetlands region of the state that’s three hours from the capital, one hour on good roads and two on what many would consider “off-road conditions,” but even more overwhelming than the distance to reach this place was the need that we met when we arrived. Sandy Kazim, the organizer and one of the medical providers of the trip told us that for much of the time she felt as though she was running an ER instead of a medical clinic. Four children in the same home with bronchitis and a woman who had recently miscarried were some of the most difficult cases, but case after case of skin infection and other diseases kept the medical providers working long past sunset, the time that we were told we had to leave for the sake of our personal security. Equally as tragic was the spiritual condition of the site. There were reports of active witchcraft taking place and a general look of hopelessness on the faces of many. “Leave if you can” –the name seemed to fit.

Still, that’s the funny thing about the God that we serve. Of all of the needy places that we could have gone, He sent us to the town of Salsipuedes. I think perhaps it was because, even though others had given up on that “Godforsaken” place, He hadn’t. He sent us there as an extension of His love in a tangible way.

I had the chance to enter into homes with several of the students of the Bible Institute while the medical team treated the sick. And as we passed from house to house, entering into their world, I thought of what Christ did for each one of us. He left His glory to live among us, to experience what we experience and to give us the hope that comes from a relationship with God. We in turn were serving as his representatives, offering the same hope that we now enjoy in a place where hope seemed for many to be a distant memory.

I spoke to many and told them that, although they might not have expected it, God had sent us to them specifically to let them know that He had decided to stay in Salsipuedes and that he was looking for hearts in which he could live. We prayed with many as they wrestled to take those first steps toward a relationship with their Creator.

What will happen is hard to determine. The routine of the life poverty has a grip that is relentless. C.S. Lewis once said it this way:

Indeed, if we consider the unblushing promises of reward and the staggering nature of the rewards promised in the Gospels, it would seem that Our Lord finds our desires, not too strong, but too weak. We are half-hearted creatures, fooling about with drink and sex and ambition when infinite joy is offered us, like an ignorant child who wants to go on making mud pies in a slum because he cannot imagine what is meant by the offer of a holiday at the sea. We are far too easily pleased.

So is the work in Salsipuedes; the population is run down, too tired to hope, too tired to dream of something better, and perhaps easily placated with the counterfeits that false religions or momentary escapes like drugs and alcohol can provide. Still, I believe that something began in the heart of those that we touched on that Friday. They received a taste of the love of God, and I believe that through the persistence of the pastor and the congregation that is serving that town, together with the regenerative power of the Holy Spirit, the very character of that town can change. In fact, I’m looking forward to the day when they invite us to the official name changing ceremony.