A Cause for Satisfaction 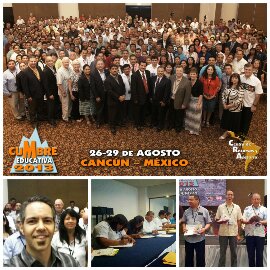 I couldn’t help but smile as over 350 educators, missionaries and Mexicans alike, descended on Cancun for the “Cumbre Educativa 2013: Formación Ministerial Transgeneracional (Educational Summit 2013: Transgenerational Ministry Formation).” It took a coordinated international effort that spanned a sixteen month period of emails, meetings, and errands, but on that day, Monday, August 26, 2013, as the participants began to arrive, all of the hard work was coming to fruition.

There were plenty of reasons for me to be happy. There were teachers, from all different walks of life, gaining access, some for the first time, to sessions designed to help them pass on their faith to the upcoming generation. There was also an enthusiastic response to 18 workshops designed to help the participants better communicate biblical truth and assess the progress of their students. Still, the true motivation for my satisfaction came from what was going on behind the scenes.

As new missionaries, we felt strongly that our plans and projects should be shaped in conjunction with the people that we were going to serve. We dreamed of beginning a journey with our Mexican counterparts to discover God’s vision for this country and then work shoulder to shoulder with them to see it become a reality. It was this dynamic of collaborative ministry that we were seeing come to pass during the months leading up to and during the Cumbre.

It began with a desire on the part of Mexican leadership to increase the importance of ministerial formation in the eyes of the church. They reached out to the missionary community to help shape the desire into a vision, and we were invited from the very earliest stages to have a seat at the table to realize that vision.

As we worked side-by-side on the Saturday prior to the event to assemble the materials that each participant would receive, I looked across the room. There we were, missionaries, national Mexican leadership, and local pastors, teachers and students all collaborating together with the same common goal. It was a beautiful moment even if the heat and the strain had us all looking a bit ragged.

So while I was thrilled that education, something I truly believe in, was being emphasized, I was ecstatic that this emphasis was something that we had envisioned, planned, and executed together. That is certainly a cause for satisfaction.

As I close this post I want to express our gratitude to our Mexican leadership: General Superintendent Abel Flores, Director of the National Christian Education Department, José Saucedo, and his Secretary/Treasurer Fernando Figueroa for inviting us to take a seat at the table as this vision was formed and realized. In addition, I would like to thank Rod and Sherry Boyd, veteran missionaries and directors of the Resource and Advisory Center in Panama who spearheaded and guided this special collaborative effort. ¡Gracias a todos!