Sharing the Hope of Christmas 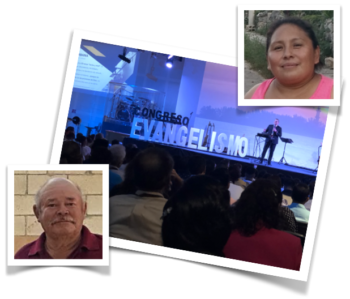 In the month of November, Kelly, Jonathan and I (Dave), had the privilege of attending the first-ever National Evangelism Conference in Veracruz, Mexico. It was a beautiful sight to see the more than 1,800 participants commit to spreading a message of love and hope in the location where, 500 years prior, the Spanish Conquista had unleashed a wave of oppression.

Still, even with the enthusiastic response in Veracruz, it’s easy to feel overwhelmed when confronted with the unfinished task in Mexico: over 113 million who still don’t know Jesus, 3 million of them considered unreached, in a nation becoming more violent and less secure by the year. How can so few make a difference in the face of so great a need?

Then, I think of the Christmas story, and how God came to Earth in the form of the baby Jesus, so small and seemingly insignificant. His bed was a feeding trough. His first visitors, simple shepherds. Even at the height of his popularity, he could be described as a homeless, itinerant preacher. His best friends were among the most marginalized of Jewish society. Yet, it was through that one life that God culminated his plan of salvation and through those few followers that he literally changed the world. That is the hope of Christmas.

And that is the hope that we share, that God will bring peace on Earth, fullness of life, as well to Mexico. But who does he have to represent him in that country? Many are like Roberto (photo, bottom left), an illiterate pastor in Kini, certainly not wise by the world’s standards, but with God’s help, he’s planted 8 churches. Or there’s Lupita (photo, top right), not powerful or influential, not even in her local church, but, through her diligent visitation, she’s led dozens to Christ. Against the sheer numbers of those who still don’t know, the 1,800 who attended the evangelism conference may seem a weak witness, but God’s weakness is stronger than the greatest of human strength (1 Cor. 1:25).

So take heart wherever this word might find you this Christmas season. The outlook may be grim, and the future may seem dark indeed, but the light has shone in the darkness and the darkness can never extinguish it (John 1:5). Experience the hope of Christmas and be sure to pass it on.

(This article appears as well in our winter newsletter. Download a PDF copy to print or share electronically.)