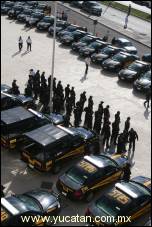 “Mérida is a tranquil place.” It’s a place where “no pasa nada (nothing happens),” the residents enjoy saying, but this headline from today’s edition of the Diario de Yucatán, one of the major newspapers of the city, seems to suggest that things may be changing.

No, we are not under military alert, nor have we hired armed guards to follow us around the city. And yes, children still do play in the park down the street, and many enjoy evening strolls along the avenues. But what many once thought was impossible here is now becoming somewhat routine.

Let me give you a run-down of the events.

Again, I’m not writing this post to alarm you, only to show you the current state of events here in Mérida and ask you to pray. Sure, we’d like to see Mérida return to the sleepy city that it once was, but we would also like to see this wake up call to the police become a wake up call to non-believers and Christians alike.

This world that we live in is broken, and increased security can’t fix it. Only the message of forgiveness of Jesus and a restored relationship with God can, and only a unified, mobilized church, reaching out to it’s community can bring this message.

Pray for peace, but pray for the lasting peace that only salvation can bring.

Photos are from www.yucatan.com.mx. You may also read the special section detailing these events in Spanish.