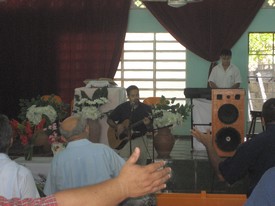 Even after a year and a half here in Mérida, God still finds ways of stretching us. In January, while chatting with pastors before a sectional meeting, our president asked if I played an instrument. I responded that every now and again I played the guitar, while I had considerable experience on the drums. He followed up that question with a request that I lead worship that meeting. Now, I had lead worship in the past, but always in English. (I think the number of choruses that I know on the guitar in Spanish could be counted on one hand.) Therefore, I did what any self-respecting perfectionist would–I put him off, until the next month.

I used that time to gather the some more choruses, practice, and pray. (It’s amazing how the weeks fly when you’re anticipating something like this.) Of course, I second guessed my decision. I almost breathed a sigh of relief when I thought that perhaps the meeting had been canceled for the month, but, regardless of my doubts, the event came. The end result this last Monday certainly wasn’t perfect, but it was a beginning. I was able to sing (staying on key for the majority of the service), play the guitar, and I actually felt that I had led others in worship.

When I began my Spanish classes, I looked forward to the day when I would be able to do this very thing, but for one reason or another, I had put it off. Not enough time, other responsibilities more pressing, the list could go on. Isn’t it great that God doesn’t forget those dreams? In fact, I’ve found He sometimes uses others to push us into realizing them.