Thankful for our Family 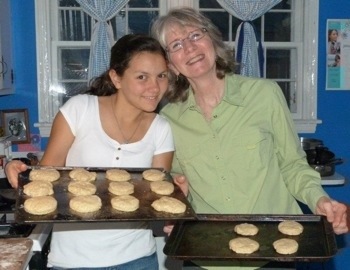 This Christmas season, we were able to return to the US to spend time with the family. Our days were full of visiting, catching up, eating (lots of eating), and just being together.

As we prepared to leave, Kelly’s mom asked what it was that we wanted to have for dinner. It was decided to prepare chicken and biscuits, a definite taste of home in then Yaple household. Still, while the meal was excellent, the preparation time is what really got me thinking. There was Kim, working into kitchen. Rebekah was there as well working alongside her, patting out biscuits onto a cookie sheet before baking. They were talking and laughing, pictures were being taken, memories shared. It was then that I was reminded that missionaries aren’t the only ones who make sacrifices.

Nevertheless, we feel from our family nothing but support for what God is doing through us. I joked with a few Mexican friends as we were preparing for our trip that we were returning for the holidays because our parents had accused us of kidnapping their grandchildren, but nothing could be further from the truth. What happened to Jesus in Mark 3 (also in Matthew 12 and Luke 8 ) when Jesus’ mother and brothers had come to “collect” Jesus and take him home from his ministry has never been our concern. On the contrary, our parents have released us to the Lord, and pray constantly for the work that we are called to achieve. And even though my mom has wondered aloud on one occasion, “Why did He have to call you so far away?” Her sentiment was one of resignation preceded by, “When you were called by God to be a missionary, I gave you into His hands.”

And so, having returned to Mérida, reestablishing ourselves into our work and school schedules, I wanted to take time out to recognize the others who unselfishly gave so that we could be released to do what God has called us to do. Thanks Grandma G., Grandma Kim, Papa Dave, and all of the aunts and uncles (too numerous to type in a brief posting) for giving so that we could go. May God recognize and honor all that you have done, and bless you beyond measure because of it.