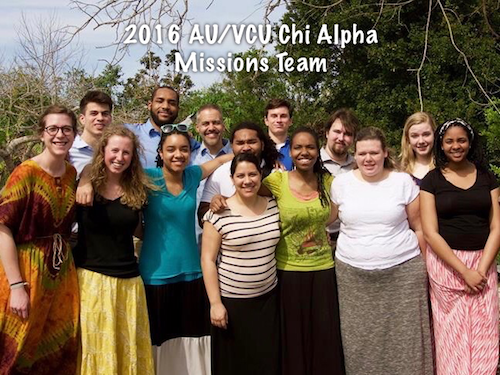 From March 5th through the 12th, students across the United States were celebrating their Spring Break. Many of them planned to catch up on some much needed rest. Others were on their way to more exotic destinations, but one group of students had different plans. Sure, they started out as many of their peers, making their way from Dulles International Airport to Cancun, but the rest of their itinerary was drastically different. They skipped the parties to take up paint brushes and cashed in their chance at sleeping in for the opportunity to spread some joy to the people of the Yucatan. 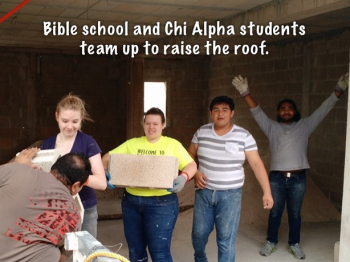 Yes, just last week we had the pleasure of hosting a combined Spring Break team of Chi Alpha students from American and Virginia Commonwealth Universities. The team of 14 students and staff, including my twin brother Mike, worked together with Bible school students at Instituto Bíblico Bethel to advance our construction project and give the existing buildings a much needed fresh coat of paint. They ministered in area churches, blessing congregations with their songs, skits, testimonies, and messages. They also spent time in Sierra Papacal, preparing the church land for upcoming construction while hosting services for children and adults alike.

But these Chi Alpha teams are valuable for more than what they leave behind, be it roof raised, or a wall painted, or a service celebrated. They serve as catalysts for new and continuing ministry.

Through our eight years working with short term missions trips, we’ve seen how they’ve facilitated pivotal relationships with people that we count as partners to this day. We’ve watched as their foreign investment has encouraged nationals to move forward to complete the work they they had begun, and we’ve witnessed how their example has been emulated by others who have been touched by their ministry. 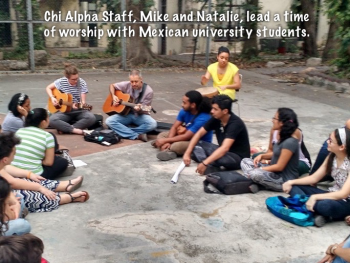 This trip was no exception. Interested in investigating the situation of students in secular universities in Mexico, Mike had asked me if I could coordinate a time of prayer and fellowship with a group of students on a local college campus. We held a meeting at the School of Architecture that was to last for only two hours. Instead, it stretched to more than three as the blended group of students worshiped together, encouraged one another and prayed for each other.

Come to find out, it was a shot in the arm for the campus fellowship that we visited. Having gone through a time of transition, they were having difficulty meeting and were at the point of disbanding. Rosy, a university employee who had been serving as a sort of sponsor for the group, thanked God for the timeliness of their visit and expressed a renewed vision for rejuvenating the flagging ministry.

So 14 students returned home last Saturday, perhaps a bit worse for the wear–maybe walking more slowly across their campuses or dozing in some of their classes. It’s to be expected; they didn’t have a vacation, they were participating in catalyzation, and we along with many others here in the Yucatan are grateful that they did!