Breakthroughs: Responding to the Need 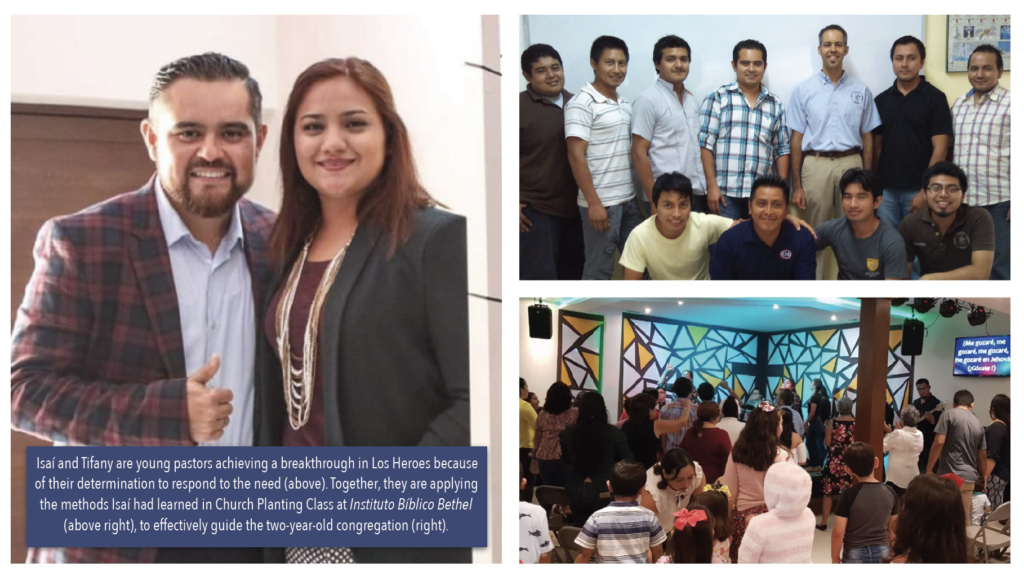 In our fall newsletter, we spoke of testimonies of breakthrough in the Yucatan. This article is the second in that series—the story of Isaí González and his wife Tifany, pastors of the new church, Casa del Rey, in Mérida, Yucatán in the developing neighborhood of Los Héroes.

Los Héroes is a young suburb on the eastern periphery of the city of Mérida, but the colorful facades of its new houses and the bustling activity of its thriving businesses do little to alleviate the loneliness and anxiety that plague its residents. Many of its current occupants have upended their lives elsewhere in the country to look for new opportunities that the relative safety of the capital city of Yucatan affords. It was to meet the needs of these young families that Isaí and Tifany decided to plant Casa del Rey in 2016.

We first met Isaí in Instituto Biblico Bethel, where he was a member of Dave’s first church planting class in 2012. Recalling that formative time, Isaí stated that he’d learned from Dave that the success of the implementation of a project is in its planning: visiting the area, collecting information, and asking for the Lord’s direction. This is the same methodology he’s now applying to the benefit of the residents of Los Heroes.

Emphasizing a vision of multiplication, they’ve fostered steady numerical growth and have facilitated significant personal transformation in the lives of the residents of Los Héroes. The Ruiz family* is one example of the change that has occurred. Attempting to start over after economic disaster nearly destroyed their marriage, Lalo* and Luisa* arrived in Los Héroes broken and hurting, but, through the invitation of a church member, they attended service at Casa del Rey and were touched by the presence of God. Since that first service, they’ve given their lives to the Lord, experienced restoration, and are actively participating in the church’s ministry.

Whereas the rapid growth has brought with it its share of complications, such as the need to undertake an eight-month building project to expand their facilities, Isaí and Tifany continue to strive to fulfill their vision, turning now to cell groups to increase their impact and meet needs in Los Heroes.

We’re grateful for the privilege to work with people like Isaí and Tiffany, people achieving breakthroughs in their area of ministry. And, as we enter this season of Thanksgiving, we want to take this time to thank you for your prayers and support, which grant us this opportunity.