December 7, 2018 in Ministry, Progress, Thanks by Dave | Permalink 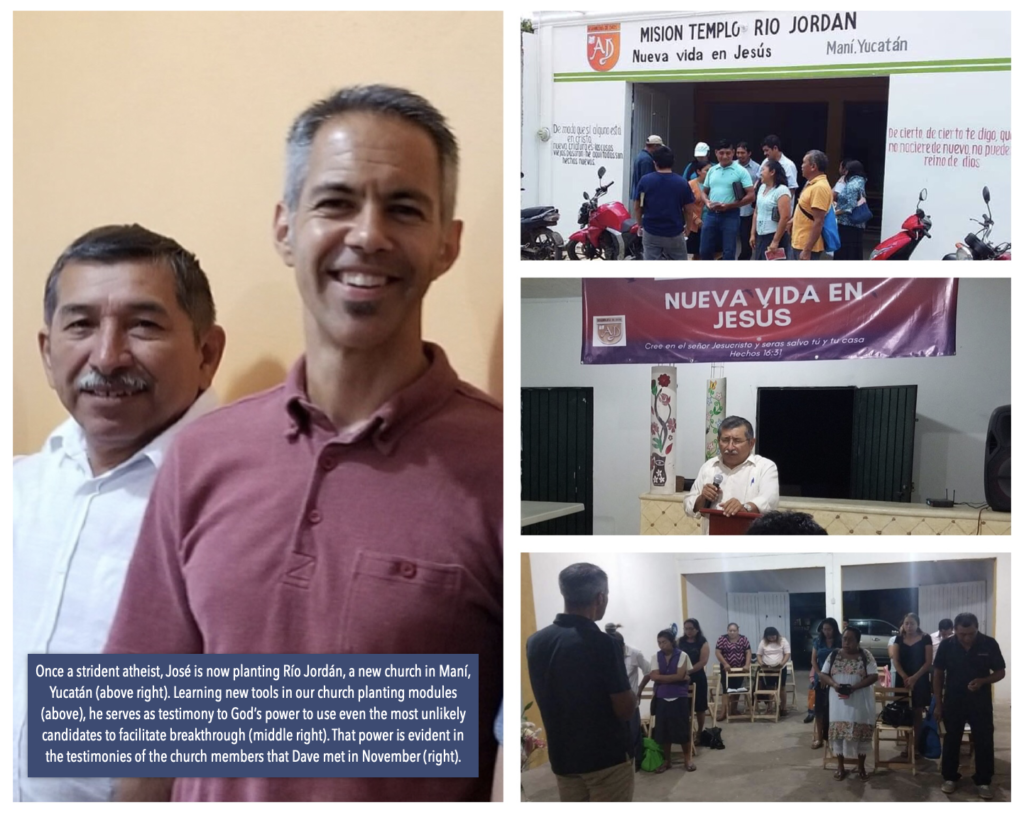 In our fall newsletter, we spoke of testimonies of breakthrough in the Yucatan. This article is the third and final of that series—the story of José Luís Vera Poot, planter of the new church, Río Jordán in the southern village of Maní, Yucatan.

In his youth, José wouldn’t have been picked out as the most likely candidate to plant a church. Having been schooled in and later teaching Marxist anthropological theories for 31 years, José had rejected God as simply a clever invention used for exploitation and manipulation. He declared himself an atheist and was proud of, what was in his estimation, his enlightened worldview. But a string of poor choices led José to infidelity, which threatened to destroy his family.

It was then, desperate to save his marriage, that José literally opened the door to the truth of the gospel. A series of visits by the pastor and several members of the local Assemblies of God church opened José’s eyes to the message of the Bible while their times of prayer softened his heart to consider the reality of God’s existence. It was a dream, however, in which José states the Lord stood before him saying simply, “I am,” that finally convinced him to believe. He was later baptized, and having reconciled with his wife, Gloria, became a member of the church. Now, José promotes the faith that he once ridiculed, serving alongside his wife as the leaders of the mission, Río Jordan, which they are planting in the western half of the village of Maní a section from which the evangelical church had been noticeably absent.

With a population of about 5,000, Maní is known for the variety of fruits and vegetables that are grown in its fields and for its handicrafts, especially the richly embroidered dresses called huipiles which are woven by the women of the community. More recently, however, the lack of economic opportunity has caused many to abandon the village, seeking their fortunes elsewhere, often turning to illegal immigration to the US as a solution to their financial problems. Those who remain increasingly turn to alcohol and drugs as a way to pass the time as they wait for their luck to change.

José and Gloria, on the other hand, have taken an active approach, dedicating themselves to sharing with others the Good News that had produced their own transformation. José was already enrolled in the local Bible institute extension when we met him at our regional church planting seminars last fall, and when we made the call for those who would volunteer to start a new work, he was among the first to respond. In the months that have followed, he’s been utilizing the tools he’s received in the church planting program to help guide both those who are discovering faith for the first time and those like Chico, who had lost their way.

Chico was a Maní success story. He had made a comfortable living for himself, saving much of what he had earned in his years as a house painter in the US. Upon his return to Maní, however, his expendable income and his ample free time gave him the opportunity to first sample and later become addicted to the alcohol and drugs readily available to those with the means to buy them. It wasn’t long before the addiction took its toll, robbing him of his money and estranging him from his wife and family.

José and Gloria reached out to Chico, who had by this time recognized that he’d hit rock bottom. They stayed with him, caring for him as he struggled for sobriety, and they prayed with him, leading him to repentance and renewed faith in Jesus. He now stands a changed man, taking steps toward restoration and testifying to the power of God to save. I had the pleasure of hearing his testimony only weeks ago at services in Río Jordán.

Yes, looking over his history, José would be considered an unlikely candidate to plant a church, but it’s just that sort of person that God has the tendency to use to facilitate a breakthrough. Thanks for your prayers and support that make it possible for us to walk alongside them, working together with them to maximize their impact.