I just have to tell you… 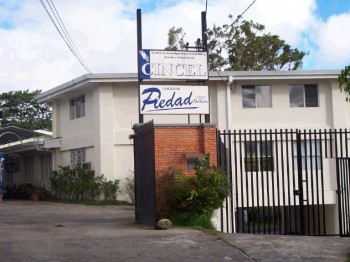 As we have been here in Costa Rica, we have been blessed to pick up where we left off with some of our old friends. We´ve had the chance to catch up with former teachers, language helpers, and missionaries alike. But none of our encounters have been as sweet as the blessing that we received two days ago.

Rosa Maria Villalobos or ¨Rosita¨ as we called her, was the teacher who helped me through my cultural integration project. As we were here in 2005-06 she was caring for her ailing husband. His condition was a frequent topic of prayer and concern during our classes and chapels. He had been stricken with a brain tumor and had been given a terrible prognosis. Even after an operation in Mexico, he was told that the cancer had metastasized and invaded his body. In fact, as late as last month, we had been told that the medicine that he had been taking and the surgery that he had undergone had left him unable to even eat.

Imagine our surprise, however, when we had been told the he had completely recovered! Rosita visited the school this last Wednesday when Kelly overheard her speaking to one of the other employees about her husband´s condition. Knowing that we had been praying for him, Kelly had her come and tell me the news. According to the most recent scans, the cancer, which the doctors had said had spread through his body, was gone! He was recovering rapidly and was regaining the use of his jaw which had been disabled because of the operation. In fact, they had planned to treat the weakened muscles with Botox which will not only strengthen his face, but leaving him looking younger as well! The only further treatment recommended at the time was that he was to chew gum in order to continue to excercise the muscles needed to chew his food.

So rejoice with us as we celebrate this answer to prayer. I hope that it serves as an encouragement to you that the God that we serve is the same yesterday, today, and forever.