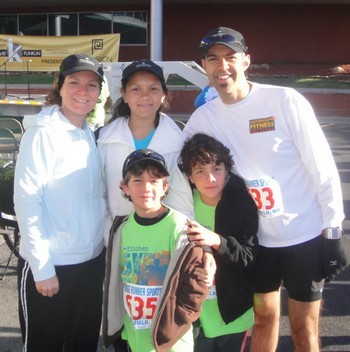 Back in January, I wrote about making a comeback –about how difficult it can be, but how I was determined to make it happen physically, coming back from a marathon injury, and in our ministry, raising funds for our return to Mexico. Well, I thought you’d like to get an update on our progress.

First I’ll let you in on my physical condition. As I mentioned in my previous post, I’ve been struggling with an IT Band injury. It is an inflammation of the band that connects the hip to the knee. After my marathon in November, I had been unable to run for 6 months as any attempt reduced me to hobbling in 3 minutes or less. I had gone through an inconclusive MRI and 12 weeks of physical therapy which never seemed to give me the relief that I was looking for. However, slowly but surely, I returned to the road, first with my boys going for 5 minute stints, then one mile intervals. Finally, I was able to run for three miles straight with my brother during our family reunion. That got the wheels turning for a comeback in the month of May.

As I took a look at the race schedule for the Springfield area, I noticed that the Kitchen Run was set for May 8th, the Saturday before Mother’s Day, and I floated the idea to Kelly. She was game for the entire family to participate. So, on the Friday before the race, we registered as a family for the 5K.

On the morning of the race, I wanted to be as conservative as possible. I had set my virtual training partner to pace me for a 7:30 min per mile pace. That would put me in for a 24 minute 5K, certainly not my fastest time, but respectable for not having raced for a half a year. I lined up in the middle of the pack, and got ready for the gun.

When we set out, I felt myself moving out pretty fast. Looking down out my watch I noticed that I was running a 6:11 pace, quite a bit faster than my conservative estimate. Still, I felt pretty good, and knowing that this was a 5K and not a marathon, I decided to see what might happen. I tucked in behind another runner who was running a similar pace, and waited to see if I’d be able to hold on.

At the one mile mark, my time was 6:30 and change. I felt good. The pace was challenging but not impossible, and I had a good duel going on with the runner I had been following. We traded the lead for the next mile before I began to hear him labor for breaths. At that point, I had thrown my conservative expectations out the window. I was racing!

I put on a bit of a burst and set my sights for the finish line, now less than a mile away. I labored a bit on the uphill, but when I turned the last corner and saw the clock, I began my finishing kick. I had beaten my impromptu opponent, and now I was going to beat 21 minutes! I put my head down and gutted out the last 100 meters, crossing the finish line just as the clock hit 21. My official time was 20:48, good for a 6:45 min per mile pace and a personal best! I had just come off of an injury to run the race of my life. Talk about a comeback!

I also had the pleasure to pace Joseph in for a 38 minute race, while Jonathan and Kelly crossed the line at 40 minutes flat. Rebekah finished with friends just three minutes later. Jonathan and I both placed in our age groups as well. Needless to say, it was a pleasant finish to a difficult road to recovery.

Now for our progress on our return to Mexico… Actually, this post is already too long. I’ll save that update for the next.