Since July of 2019, we have been looking forward to saying that phrase. Although we took on our role as Area Directors at that time, there was an anticipation of the day when our leadership would not be remote, when we would actually be living in the country of Mexico. That anticipation took us through our year of itineration until June of 2020 and sustained us during the pandemic that seemed to swallow up the months that followed. Finally, however, we can say, “We’ve arrived in Mexico City!”

Yes, on September 28th, at 6:00 AM, we were met by members of our small group from Central Assembly of God to help us check in our five action packers, our dog, and ourselves to American Airlines flight 3822. Then, after some tough good-byes to our kids, we were on our way by 8:22 AM and on the ground in Mexico City by 1:00 PM. A trip of 1,435 miles in half a day!

Now, if you’ve followed our ministry for the past few years, you may have noticed a change of venue for us in Mexico. For 13 years, our base of operations was the city of Merida on the Yucatan peninsula. Now, however, because of our role as area directors, we’ve relocated to Mexico City, home to a population of 9.2 million in the city proper and 21.8 million in the greater metropolitan area. It’s also strategic for us as it is the location of the national offices of the Assemblies of God of Mexico, a direct flight to any of our missionaries throughout the country, and an international travel hub.

We’re living in Coyoacan (translated from the Nahuatl language as “place of the coyotes”), a neighborhood south of the city center that was the original capital of Hernan Cortez’s governorship of New Spain and the home of creatives such as Octavio Paz, the author of the Labyrinth of Solitude, and artists Diego Rivera and Frida Kahlo. From our location, we’re roughly a 4-mile walk from the Floating Gardens of Xochimilco to the east and a 10k away from the nation’s largest university, UNAM, where over 350,000 students attend classes.

We’re excited to be starting this new chapter of our lives and ministry, but our arrival is not without its share of challenges, like our adaptation to life in the big city now as empty nesters or our kids’ abrupt entrance into adulthood. Still, we know that with your prayers and continued support, we’ll not only survive but thrive in this new role and new setting.

There and Back Again: A Missionary’s Tale 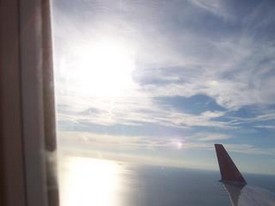 If you are familiar with Tolkien, you’ll have to forgive my obvious allusion to his popular tale, The Hobbit, but no, my recent trip didn’t include trolls and dragons, and the only real danger was related to the risks of travel by air and taxi. So to save you the long story, and the 255 pages that comprise my edition of the Bilbo Baggins tale, I’ll make it short.

On Sunday afternoon, I hopped aboard a flight to Mexico City, which seems to be recovering from its bout with the Swine Flu, where, on Monday, I met with the national leadership team about our future here in Mexico. I presented them with a report of what we had done and the plan of what we feel God would have us do in the future. They approved that plan, and they invited us back to serve for four more years here in the Yucatán!

Now, that we have received this approval our upcoming itineration becomes more clear. Our goal during these upcoming months will be to reconnect with churches and individuals to show them what God has done and invite them to continue their investment in the lives of the people of this region.

Thank you for your continued prayers and support as we make our transition to the States with the goal of continuing to raise disciples here in the Yucatán.