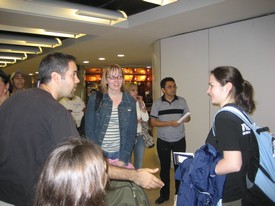 As I have noted in my previous post, the Chi Alpha Missions Team has come, ministered, and gone. However, there remains a story to be told. In this “Missions Team” series, we’ll be revisiting some of the events of the past week.

Saturday, March 10th:
Yesterday had been a time of last minute preparations: buying medicine for those who might get sick, Gatorade for the heat that we are expecting, confirmation of our rooms at Mun Ha, the place where we are going to stay, and the preparation of the Sunday School lesson that I will give. Of course, nothing is quite where I want it to be, but I’m counting on time in Muna to be able to finish everything off.

I’m worried a bit about the team. Mike emailed and let me know that van trouble had canceled their skit practice. Their worship set has yet to be developed. Still, there is no time to think about a “plan b.” We pack and head out to drop off our two pet “budgie” birds and head to the airport. 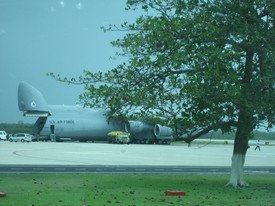 The airport is a mess with security checkpoints, armed guards and commotion on the runway. The President of the United States is arriving Monday, and already a huge airplane holding his vehicles has landed and is being unloaded. Needless to say, there are delays. The group’s plan was supposed to have landed by 1:30 but doesn’t touch the ground until well after two. The passengers come off in a trickle until, finally, around 3:00, the team is off. After hugs for “Uncle Mike” and greetings between the team and the group from Muna, Jeovany, Hasabias, and Israel, the missions trip begins with our trip to meet Pastor Julian and settle our things at Mun Ha.

Lunch was wonderful with warm exchanges between the group and the women preparing the meal. Pastor greets us and verifies the work for the week. We finish and head to our rooms in order to prepare for the morning’s service, but upon arrival, we find out that Helmer, our worship leader and most fluent Spanish-speaker, has left his resident visa at the airport. So long preparation time. Adios skit practice. It’s time for a return trip to the airport!

Before Helmer and I leave, however, the group gathers for a devotional and prayer. The trip has started at a pretty hectic pace, and many of our expectations have been unfulfilled, but Mike’s words of encouragement are well received: “God has a tendency to empower on the way,” he says. That’s not to say that we have an excuse for lack of preparation, but after we’ve done what we can, we need to leave Him space to move, and if we commit to following His plan for the week, we can expect to see Him touch lives and hearts, not only those of the people of Muna, but our lives as well. I feel lead to “release” the team to minister. This trip is not mine to make or break. We are operating as a community of believers and we can expect God to use each one of us.

As we head off down the road to Mérida to recover the lost visa, there is a sense of peace in each one of us. There is also an excitement about what God is going to do through this team. May your will be done Lord!