Missions Team: The Love of the Father 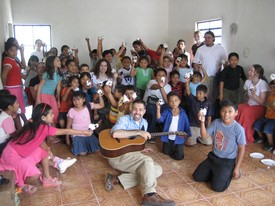 As I had stated previously, you’re reading these updates via time delay. Our Chi Alpha Missions Team is now settling back into their routines on campus, but there remains much to be told:

We arose the morning of March 11th a bit less worse for the wear from a night of sleeping without our pillows but looking forward to the work of the day. We ate breakfast at Mun Ha, which serves some great huevos rancheros (eggs ranch-style). Our bellies full, we left for the church.

The theme for the week was Luke 15: the stories of the lost sheep, lost coin, and the lost son. The classes were divided with the team going to minister with the children. I spent the morning with the adults working verse by verse through the chapter and showing how our growth in discipleship is shown by the measure in which we reflect the activity of Jesus. Jesus searched for the lost and rejoiced when they were found. We too as Christians, or Christ-like people reflect Christ’s love when we act this manner.

It just so happened that the night before we were looking for lost things, namely Helmer’s Resident Visa Card. So, although I lost out on prep time, the ready illustration about the relief and joy that we felt in finding the card, drove home the point I was trying to teach. What Mike had related the night before was coming to pass.

The real highlight of the day, however, happened during the evening service. Recapping the story of the Prodigal Son in Luke 15, Mike preached, with Helmer translating, on the love of the father–a love so extravagant that would cause a grown man to act foolish as he ran to embrace his filthy disgraced son who was “lost but now found.” The response from those in the church was immediate and heartfelt. In a country that has had to deal with an absence of loving fathers, Mike’s message had struck a chord.

Yes, God was empowering us on the way, and we truly felt his presence helping us relate and minister across language barriers, as team members and church members joined in prayer around the altars. That night, back at Mun Ha, we shared our joy as we had experienced the amazing work of God through us.