Sending them Out: The First Action Group is Commissioned! 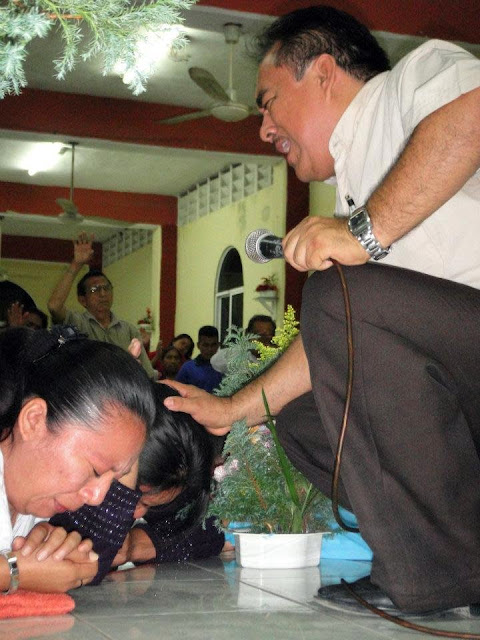 The songs spoke of fulfilling the Great Commission. The sermon was from Romans chapter 10. Believers were called forward for special prayer to be sent out to do ministry. It sounds like any other missions service that you’ve witnessed in your local church, right? Except this service didn’t take place in the U.S. It was held in Chemax, Yucatán, where, this past Saturday, a group of believers were sent out to plant the first evangelical church in Cocoyol, Yucatán. (View more pictures of the event here.)

Kelly the kids and I traveled the 2 1/2 hours to be there for this special event, which marks the first outreach based on the Jesus Film Project that we have been promoting throughout the district. The church was filled for this Saturday service where a group of 7 church members committed themselves to the 8 week project of evangelism and discipleship guided by the Jesus Film material. Abel Can, the District Missions Director, and Miriam Pech, the District Coordinator of Ministry to Ethnic Groups were on hand to encourage and witness the event. Also present was the Jesus Film Team comprised of Pedro Pablo Balam and Angelino Ek, who will be guiding these believers through the church plant process.

I also had the opportunity to greet the congregation. I thanked them for their vision to break down the barriers to the gospel that many Maya speakers face. In many parts of the Yucatán, those who would want to learn more about Jesus have to learn Spanish to do so. As this Action Group moves to plant this church, they are announcing to the community of Cocoyol that God has come near, that He speaks their language, that He desires to dwell in their context. I commended them for catching the vision of Revelation 7:9 where those of every nation, tribe, people, and tongue, even the Maya, gather around the throne to worship Jesus, the Lamb of God.

It’s our prayer that this event is the first of many as the vision of reaching the Maya people is extended throughout Yucatán.