You are currently browsing articles tagged Assemblies of God.

A Critical Moment for Mexico 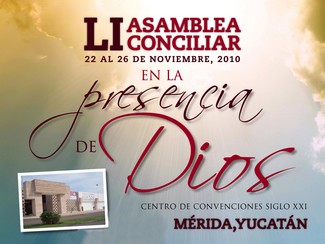 As you may know, this year is very significant for Mexico as a nation. Not only is it the 200th anniversary of it’s independence from Spain, it is also the 100th anniversary of the Revolution, the event which liberated the country from the dictatorship of Porfirio Diaz and initiated its tumultuous journey to its current condition. The modern Mexico now finds itself at a crossroads. Plagued by the double threat of drugs and corruption, it fights an uphill battle toward progress and tranquility, words that are seldom heard in the headlines that daily remind us of its stark reality.

As a fellowship too, the Assemblies of God finds itself at a crossroads. As we stand at the threshold of our upcoming General Council, to be held here in Mérida, we are charged with the task of electing new leadership. Daniel de Los Reyes, our current General Superintendent has reached the end of his term and, because of term limits, he is unable to seek reelection. Also, up for election are the positions of General Secretary and General Treasurer. Realistically, this may mean a complete change in leadership as we enter this new century in the history of the nation which we are called to serve.

It is our desire, as we face this critical junction as a fellowship and as a nation, that you would join with us as a missionary body as we pray for God’s will to be done in the proceedings of this important meeting. Our Area Director, David Greco, said it well when quoting from the book of Proverbs, “The lot is cast into the lap, but its every decision is from the Lord.” Therefore, we ask you to join us as we pray that His hand would be evident and that His guidance would be tangible with every decision made and in every vote that is cast.

We believe that in the face of the current adversity our fellowship has a critical role to play. It is our desire therefore that at the end of this council we will be able to say that we are better prepared than ever to accept that role and fulfill the mission that God has called us to undertake.

Getting Back to Our Roots 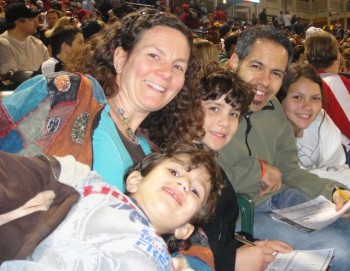 This last weekend was full of amazing coincidences. It started on Friday evening. Headed down to Nederland, Texas for services with Greg and Amanda Swafford, we stopped for a night with friends Brian and Jessica Fisher in Frisco, just north of Dallas. They had apologized earlier in the week for having to attend a minor league baseball game while we were there, but being the flexible, baseball loving missionaries that we are, we were up for the outing. Imagine our surprise, however, when we found that the game was between the hometown Frisco Rough Riders and the visiting Springfield Cardinals! We got a chance to root for our hometown team in Texas!

The real treat came following our weekend. Our nine hour trip back from services with Danny and Stephanie Baker in Leesville, Lousiana would take us past Hot Springs, Arkansas, the birthplace of the Assemblies of God. We debated the visit, as the side trip would certainly kill our ETA, but our debate ended as we researched the stop. The first General Council which gave rise to the Assemblies of God took place from April 2nd until the 12th, 1914. It just so happened that on Monday we were passing by Hot Springs on our denomination’s birthday!

We called area churches and were directed to the spot which sits on Bath House Row in downtown Hot Springs. The plaque, laid on the 60th anniversary of the event, is the only physical remnant of the former Hot Springs Opera House where the council took place. It’s easily overlooked as visitors pass by, many without even looking down at the inscription affixed to the cement, but for us it has special significance. 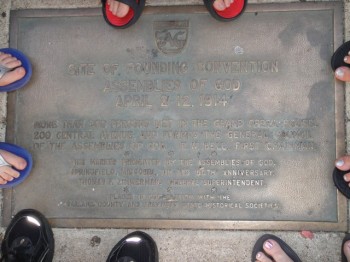 On Monday, April 12, 2010, 96 years after the event, we found ourselves returning to our roots, and as our feet surrounded the memorial plaque, we reflected on the principles that brought about the founding of the Assemblies of God–evangelism, missions, and ministerial training. We’re glad that now, almost 100 years after its organization, those principles are still at the forefront of its agenda. What’s even more humbling is that we’re able to serve as its representatives as we emphasize evangelism, missions, and ministerial training, making disciples in the Yucatán.