A Word from the Cross

Today during the afternoon service, I will be sharing about two of the seven words from the cross that Jesus spoke. I’d like to share one of those with you on this day that we remember our Saviour’s death:

Father, forgive them, for they do not know what they are doing. –Luke 23:34 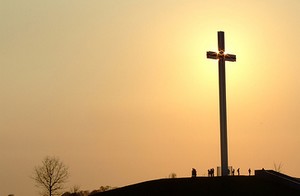 Beaten, bloody and tired, Jesus now hung from the cross. Just hours before, He moved freely about the city, teaching and celebrating the Passover with His disciples, but now He had been arrested, judged, and condemned. The hands that had healed the sick, the arms that had reached out to children, the feet that had walked in search of the lost had been stopped–nailed unjustly to the wood.

Jesus, the only truly innocent one of all now paid a debt that He didn’t owe. He never blasphemed God, yet the priests handed Him over to Pilate for this offense. He never tried to raise up a rebellion against Rome, but over His head was the charge, “Jesus, King of the Jews.”

In this moment, He exemplified the classic picture of a victim: a man who, for no fault of his own had to suffer. Nevertheless, Jesus Himself rejected this description. Moments before, Jesus redirected the pity of the women who had met him on the way saying, “Don’t cry for me. Cry for yourselves and your children instead.” In front of Pilate, Jesus rejected his intervention, explaining that that the authority that He recognized came from a place higher than Rome, and in the Garden of Gethsemane, Jesus allowed His power to flow when the soldiers who came to arrest Him fell down before Him. Obviously, it was something else that held Him to the cross.

It was love. It was the power of the only One who knew what He was doing. Among all of those who played a part in His crucifixion, Jesus was the only one truly free. The others were like the priests, who had been blinded by their rage, or like Pilate, deceived by his supposed authority, or like His disciples, trapped by their fear. Jesus suffered from none of these delusions.

From the beginning, Jesus understood his purpose–to give His life as a ransom for us all. Whatever doubt that he had held on to left at the Garden with his declaration, “Father, not my will, but yours be done.” Now with these words, “Father, forgive them,” He shows the culmination of His power. Jesús, as the only one who never sinned, as the only one who remained pure, as the only God-Man, refused His right of vengeance, and in that moment, in that act of pure love, He granted them their pardon.

He freed those who were still cursing Him, those who couldn’t understand that that man on the cross was their only hope They didn’t know what they were doing, but Jesus knew. He knew that it would mean His humiliation and His death but even so, He did it. What is more, in His love He removed their guilt.

But it wasn’t only the soldiers and the priests and Pilate that crucified Jesus on that day some two thousand years ago. You and I are responsible as well. The Bible says that all of us had gone astray to commit sin, and Jesus carried all of those sins on the cross. He died for us even when we had not yet realized our need for Him. In other words, while we were blind like the priests, or deceived like Pilate or tormented like His disciples, Jesus extended His forgiveness to us. He removed our guilt for His death from us as well.

In addition, with the words, “Father forgive them,” Jesus extends to us an opportunity. Jesus promised, before He returned to the Father that, in this word we would have trouble, but counseled us to take heart, for He had overcome the world. But, how did He overcome? Certainly not by His miracles or by His teaching, because, having done all of that they still crucified Him. No, He conquered it through His love–the love that put up with rejection, that endured the Roman lashing, and that suffered the crucifixion, the love that gave forgiveness instead of condemnation. And we, being His hands and feet can follow Him in His example.

What problems do we have? Abandonment? Rejection? Pain? Jesus suffered all of these, but never became their victim. Now, what will we do? We have the opportunity to triumph with Jesus. We have the opportunity, today, to extend forgiveness. Maybe those who have mistreated us don’t deserve it, but neither did we, and we accepted it. Let’s follow Christ then. Let’s be victors and offer, like Him, forgiveness.

The Most Excellent Way 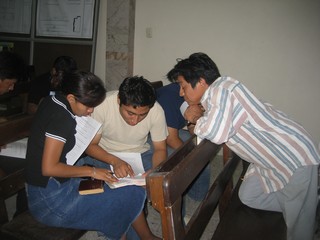 I just finished up another evangelism conference, this marking my sixth opportunity to hold such an event here in the Yucatán. With more experience comes more confidence in sharing the material, but that experience also brings a certain familiarity with the topic–an anticipation you could say of the inquiries and the reaction of the audience, but during class this last Thursday, a question was asked that I hadn’t anticipated.

We had been studying Mark 6:30-44, the account of the feeding of the 5,000, and contrasting the disciples’ reaction to the crowd’s needs with that of Jesus. Analyzing the context, we concluded that the disciples’ inaction and Jesus action was related to a key element, compassion. Jesus saw the plight of the crowd and the compassion that he felt moved him to action even though he was in the midst of extreme personal sorrow. The disciples, coming off of a successful preaching tour, failed to react because their lack of compassion.

Usually, the anticipated question is “How do we learn to react in the way Jesus did?” a question that I anticipate and answer within the lesson follow-up, but this time an unanticipated question was raised; a student asked: “Should we act compassionately first and then preach, or should we preach first and then display acts of compassion?” Caught off guard, I had to think a bit about the question. I wanted to know what it was that this student was trying to clear up in his mind. His clarification clued me in. Some organizations emphasize compassionate acts, feeding programs, rehabilitation centers, and medical clinics while others emphasize teaching and preaching engagements. This student was trying to understand what stance we should take in the debate between presenting evangelism as a moment of decision or what what some call the “social gospel.”

The question illustrates the danger of thinking in predefined categories. It can cause us to limit our outreaches to traditional activities like preaching, teaching, and passing out tracts while avoiding food distribution or medical clinics in an attempt to show our emphasis on “telling the good news,” or it can cause us to add mandatory evangelistic events to our “social outreach” in order to justify the undertaking, a practice that can lead others to criticize us as evangelicals for opportunistic proselytizing, or can lead to the phenomenon of “Rice Christians,” those who confess Christianity as long as the hand outs keep coming.

Separating compassion and preaching/teaching into separate categories should make us ask the questions: “Is our preaching without compassion?” and “Is social outreach condemned or considered second-class by scripture?” Obviously the answer to both questions is no. The real question, therefore, should not be, “How should our evangelism look?” but rather, “How should our evangelism be motivated?”

Returning to the passage in question, we see that Jesus taught and fed the needy crowd. There was no separation of his actions into evangelistic and social. Rather compassion motivated him to meet the need before him. Jesus wasn’t checking off items on his list; he was instead showing us that the compassionate response considers its recipient as a whole person.

Interchanging the word compassion for love can perhaps clarify the point. Paul, in trying to settle church division in Corinth, culminates his argument for unity with the famous love chapter of 1 Corinthians 13, which he introduces as “the most excellent way.” In his opening words, he lists both “spiritual” (prophesy and tongues and the practice of faith) and “compassionate” (giving to the poor) acts as worthless without love. It’s little wonder then that 1 John 4:12 says that we would be known to be true, not for our excellent Bible teaching or for our hospital building, but rather for our love, and this is fitting because love when perfectly applied led to eternal life. (Jn 3:16)

Reaching out to a lost world in love then enables us to push past the categories and throw away our checklists. Ultimately it allows us to utilize the appropriate means to communicate God’s love, be it through a cup of cold water or an offer to pray the sinner’s prayer.

Learning and encouraging the most excellent way here in the Yucatán,