We get to Play Baseball 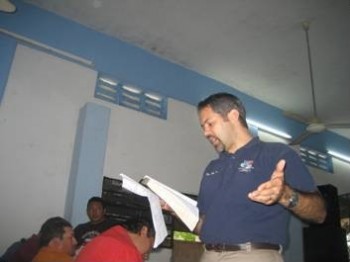 Around this time of the year, I start to get anxious. It’s been almost three months since the end of the World Series, and we’ve got only a few short weeks until pitchers and catchers report to start the 2009 baseball season. I’m looking forward to the date with anticipation, knowing that soon they’ll be playing baseball, and hoping that this will be the season that the Yankees win it all again.

In order to prepare, I start to watch baseball movies. One such movie is The Rookie , that Disney released some years ago. It’s the story of a high school science teacher who gets another shot at playing in the majors. In one scene, travailing in the minor leagues, traveling the lonely miles and feeling the pressure of his responsibilities at home, he decides to throw in the towel. “I’m just wasting my time,” he says to his wife over the phone. She asks back, referring the the game, “Do you still love it?”

He hangs up the phone and goes for a walk to think it over once again. Along the way, he encounters a night little league game, and in it he finds the joy and the hope in the game that he played as a child and had been given a chance to return to as an adult. With a renewed outlook, he heads back to the locker room. As he enters he asks another player, “Do you know what we get to do today?” Then, answering his own question he says, “We get to play baseball.”

Why am I waxing eloquent about baseball? Because I’ve been thinking about our job as missionaries. Lately, we’ve been really busy, rushing from place to place. I celebrated my daughter’s birthday on Saturday and directly after I was teaching our first session of the District Stewardship conferences that I had been invited to teach. Since that time, I’ve been on the road 3 of the past 4 nights, getting to bed later each night. When this finishes, I’ll be on the road again, this time to help in an evangelistic campaign that will take place two hours outside of Merida, where we have our home.

At times like these, I find myself missing my family, looking forward to getting home, and sometimes wishing that the events would be over. But then I have to ask myself what it is that I am actually doing. I received the call to missions when I was 15 years old, and since that time, my life had been centered around making it to the field. We prepared ourselves, obtained the necessary approvals, and raised funds for the purpose of becoming missionaries. Now, we’re doing it. How many times have I hoped, prayed, and dreamed of the day that God would allow us to make it to the field, and now it’s a reality.

Thinking about it again I’d have to say that, sure there are times when we find it hard, but we’re doing what we’re called to do. God’s fulfilled our dream, and every moment that we have here is another moment that we get to step out into another adventure with our Lord.

So I want to say thanks to all of you who have had a part in helping us to get here and stay here. I’d also like to ask you to pray for us. Pray that the words that we say would be what God would ask us to share, and pray that these events will reach the people that He’s preparing. And while you’re doing that, stop for a moment and thank God for the journey that you’re on with Him. After all, “We get to play baseball!”

Thumbnail appearing on the excerpt of this article from B Tal’s photostream on Flickr.com