You are currently browsing the archive for the Nature category.

Chilling out in Mérida

This little weather badge may not mean much to those in the states dealing with snow and temps in the teens, but for those of us who have acclimatized to the tropics, we’re suffering through a real cold snap! For the past three days we’ve experienced temperatures that have struggled to get into the 70’s during the day, only to plummet into the low 50’s a night. (The low this morning was 49!) On top of that rain, clouds, and high humidity have made everything feel that much colder.

For those of you who are ready to pack the trunks and come down for a swim let me give you some perspective. Mérida has yearly average high temperature of 90 degrees and an average low of 70. For further clarification, we go through 339 days of the year with a high temperature above 80 degrees, 238 of those above 90. (You can check out these and other weather statistics at the Mérida Weather Review.) That means that for the past three days we’ve been 20 degrees outside the norm for both the high and low. So you can imagine the complaints that we’ve been hearing. Last night, our pastor’s wife let us know that it is never this cold, and she’s not off by much. The record low, according to my research is 41!

So while you’re scraping the ice of your windshield to go to work, remember those of us in the Yucatán who are suffering with you. Boy am I glad we got our hot water fixed this weekend!

Update 2/26/07: Proving Mexico can indeed get chilly is this article from Jim over at his blog: Finding Direction. It was submitted without coercion.

Now that is a bug!

We had the opportunity to travel to Tortuguero last weekend to celebrate Kelly’s 30 something birthday. While we were on the trip, we realized that, besides the green sea turtles, there are other natural wonders that grow to become quite large. Spiders were certainly in that category as was this elephant beetle. Take a look at Kelly’s hand in the video if you think this is just an extreme close up!

Well even though I have missed video blogging week, as mentioned on Missionary-Blogs.com I thought it was appropriate to put up a video of another visit a volcano, since we seem to be keeping a pretty good catalog of trips to these wonders of nature which you can visit here (Irazú) and here (Arenal).

The day below Poas, which sits above the central valley of Costa Rica, was sunny and bright. But when we reached the park entrance, we were told that the crater was completely clouded over, and at the time of the day that we were visiting, probably wouldn’t be visible. However, with Kelly’s family visiting, and the remembrance of 2 other failed attempts to view the second largest volcanic crater in the world, we were determined to try.

When we arrived, it was as we were told. All we could see was a wall of clouds. But almost as an answer to prayer, the clouds parted, and we were able to see Poas in all of its magnificence. Allow us to show you. Click on the player above to view a Google video file of the appearance of this, one of the most frequented tourist sites in Costa Rica. Note: What looks to be the lake in the center of the video is the principal crater.

Sometimes Language School is hanging on for dear life. 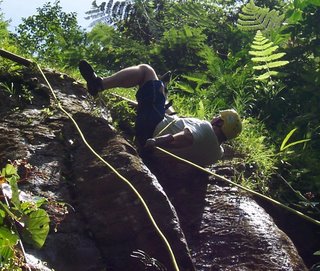 Sometimes, we are on top of the world and think that fluency in Spanish is within our grasp. Other times, we are somewhat like Josh Amiot, hanging on for dear life!

This is the stage that we find ourselves in this week. We are now passing through our “ECHO”s, or Spanish conversation proficiency exams, during which our conversation with one of our professors will be recorded and our level of progress marked. This is one of the most stressful times for the students of CINCEL as we try to bring everything together for this “final exam” for the current term. (Two terms down and one to go!) We appreciate your prayers on our behalf during this time.

Now about the picture. Josh had the unfortunate experience of slipping on the rappelling wall in full view of the camera during our recent men’s retreat. We certainly thank him for the wonderful object lesson, and of course for his great sense of humor!

Last Saturday, we had the opportunity to visit the volcano Irazú. This volcano, located directly east of San José is most generally known for it’s eruption of March 19, 1963, the day the President Kennedy visited the country. At the summit of this now dormant volcano, one can find a strange, cold and almost moon-like surface. As well as a temperature has been known to create frosts in this tropical country. However, few of the group of students that traveled to visit this natural wonder were expecting to see this placard of US culture waiting for us when we arrived.

It appears that the US Department of the Interior once had an earthquake monitoring station here at the summit of Volcán Irazú, and this metal plate was a remnant of their operations. What at one time may have served as a tool for scientists served on Saturday as a reminder of the thoughts and prayers of family and friends back home for a small group of missionaries. And to those who continue to show their love and support we say, “Thank you!”

We felt no “temblors” while we were exploring the terrain, but we did get some great pictures. Take a look at them now by clicking on the picture to the right or by clicking here. 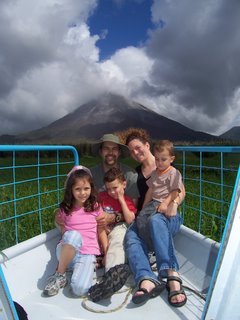 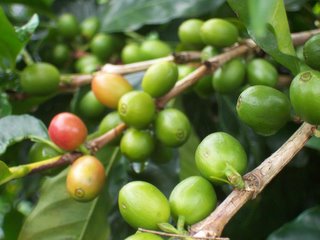 Many of us would be able to finish that verse from the book of Zechariah from memory, and it is a comforting thought that this task of saving mankind has not been left to human devices. Of course, many of us draw strength from a much more earthly source of power as we begin our mornings. That morning motivator, coffee, is in abundance here in Costa Rica, and they don’t just sell it here they grow it here.

We recently had a chance to take a side trip to the Tres Generaciones coffee plantation, and I had a chance to snap some pictures. Click on the picture to take your own tour and sample the latest feature to our website, photo albums! Hopefully, you’ll never take that morning cup for granted again!

Hanging around in Costa Rica

Ready for anything has long been the motto of the missionary, and the folks here at CINCEL take that motto seriously. Here we are at Colinas del Poas, about an hour and a half drive north from San Jose, receiving instruction, with fellow Mexico missionaries Ryan and Christy Thomas, about how to cross from treetop to treetop during our rainforest canopy tour.

No roads? No problem. We’re trained to cross any terrain. You know, there might be something here for Speed the Light! Want to see what the experience was like? Click on the picture and hang on!

We’re Not in Missouri Anymore! 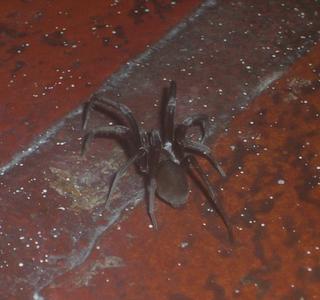 We thought that you might like a look at one of our house guests here in Costa Rica. With no winter to speak of here in San Jose the spiders have opportunity to grow quite large!

In actuality, there are only two seasons in Costa Rica, dry and rainy. Right now, were in the rainiest month of the year. It rains here nearly every afternoon. This will continue until December when the dry season begins. We have come to find out that the umbrella is a necessary item…sometimes the hard way!