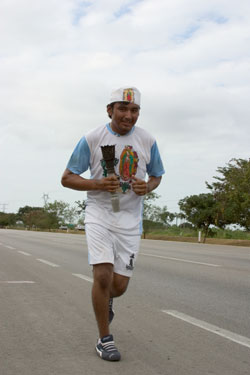 We were driving back from a planning meeting in Muna last Tuesday, where we’ll be hosting my brother and his Chi Alpha team, when I noticed, all along the roadway, bikers, runners with torches, and support vehicles flashing their lights and honking their horns. There were hundreds of people in the hour long stretch that we traveled.

It resembled some kind of Olympic procession. It was as if this group was ushering in the torch to light the first ever Yucatan Games, but looking closer I noticed that each one was wearing a t-shirt displaying the symbol of Mexican religious devotion, image of the Virgin of Guadalupe.

Researching further, I learned from YucatanLiving.com that these “antorchistas” are youth that have made a personal vow to the Virgin, and last week on December 12th, the Day of the Virgin, they ran or biked in order to complete their vow. The trek is a point to point journey, with more favor bestowed for greater distances. Apparently, the bicycle was introduced as a way for the working devotee to cover more ground in a shorter amount of time. (Read fewer days off from the job.)

Of course, we have the tendency to dismiss all of this as a misguided devotion, a practice to abandon as pure paganism. Still, one has to admire the determination, the organization, and the passion of those who would exert themselves for their faith. We evangelicals, a group lacking the presence of young men in our congregations, can’t help but ask, “How do we instill this type of enthusiasm, this type of devotion in our faithful?”

I would suggest that the answer lies within the pages of the Bible in the example of our Lord. It would seem that we are more famous for what we don’t do (drinking, smoking, dancing) than for what we do, for what we are against, than what we are for, but Jesus didn’t seem to be this way. “This man welcomes sinners and eats with them,” was the complaint of the Pharisees and scribes. What I see from Jesus isn’t a prohibition type religion. I see a radical redefinition of religious and social symbols.

To Peter and Andrew, fishermen by trade, Jesus says follow me, and I’ll make you fishers of men. To the woman at the well, Jesus says I am the one who gives living water. At the Last Supper, Jesus redefines the traditional passing of the cup and bread during the Passover meal into a remembrance of his sacrifice on the cross and celebration of the unity that we now have in the Church, the body of Christ on the earth. In other words, Jesus doesn’t seem to separate a person from his or her culture, rather he transforms the culture in much the same way that he transforms the individual.

This to me says that we as missionaries have a need for wisdom and God-given creativity when it comes to engaging a culture. What is truly anti-Christian, and what is simply an expression of culture? How can we contextualize, not just the presentation of the message of the gospel, but also its expression in worship and everyday life?

One case in point of an interesting attempt to accomplish this redemption of culture was in the Chota Valley, a culture of Ecuadorians of African descent. This people group had a dance that utilized a bottle, worn on the head and, if I remember correctly, filled with alcohol. In the bottle would be placed items that represented the pain and suffering that the person experienced in life. Missionary Joe Castleberry and his team, instead of prohibiting this cultural expression, redefined it. Gone was the alcohol and in the place of the symbols of pain and suffering was a flower to represent the new life the Christ brings.

I’ve not had the opportunity to see the “Freedom Valley” project first-hand, but I feel that it touches on an area that all missionaries need to consider. Did we do a disservice in our clothes-line style holiness of the 1900s? Have we relegated ourselves to the fringes of society though our lists of rules and prohibitions? How does it come across in the 21st century? On the flip-side, how does this redefinition of culture look, in Africa, in Mexico, in the US? Also, how do we know that we are truly redefining culture and not just compromising for convenience?

Granted, this task is not something that a simple post can solve, nor the work of one individual, but I think discussion is necessary and helpful if we are truly seeking to change the world.

Note: Picture was taken from YucatanLiving.com. (It’s kind of hard to drive and take pictures at the same time.)